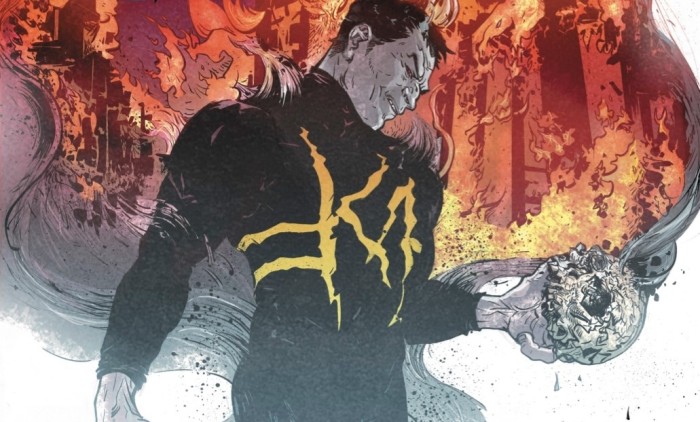 The final issue of Alan Moore’s run on Miracleman begins with a page long wall of text, narration from the mind of Miracleman without accompanying illustration. What would normally prove a poor use of the visual medium becomes through Moore’s skillful prose one of the most exciting pages in the series. He writes:

“I dream teenagers, the boys with their letter sweatshirts, girls with single brushstroke brows, in endless ice cream parlours, never growing old or running out of flavours; dream them in moon-chilled jalopies when their sitcom day is through; the delicate perfume of sex and leatherette pervades the air… I dream of a world of heroes and exciting clothes, hoods cut away to show the hair or leotards made out of flags. I dream insignia, dream lightning flashes, planets, letters, stars; of bob-cut women wearing red stillettos, ice-blue half-length capes… I dream of cities that old futurists would weep with joy to see… I dream of a world of dreams fulfilled, a place where ecstasy and not his brother pain has run amok, and even as I dream I know my dreams are almost true, a planet of attained desire and concrete fantasy that spins and glitters, balanced on the diamond capstone of Olympus.”

In the long hiatus between that final issue by Moore and Miracleman by Neil Gaiman and Mark Buckingham #1, I too dreamed. I dreamed of where a series that had quickly become among my most beloved might go after the story had concluded so completely and perfectly. I never expected the particulars of Miracleman’s soliloquy to play out precisely in the pages of Gaiman’s run, but nor did I dream of such a departure, such of refutation, not only of that dream, but of the very act of dreaming.

There is deep cynicism running throughout Miracleman #2, shared by mortals and gods and Gaiman alike. It is a stark departure from the utopian optimism of only two issues prior. As in Gaiman’s inaugural issue, the story is told from the point of view of an unnamed denizen in prayer. Whereas in the first issue this came after an arduous pilgrimage, here it’s carried to the goddess Miraclewoman on a whisper. In both cases their petitions are denied. In the prior issue, Miracleman’s reasons are as mysterious as the god of any religion. In the current, Miraclewoman explains herself and the explanation is lacking. Her supplicant, in witnessing an age of miracles all around him, dares to turn his gaze upward and and seek perfection of a kind he knows to be real: perfect love made possible by a perfect beloved. But the goddess is an atheist, of sorts; she doesn’t believe in beauty, despite her own.

Alongside the second story in the issue, which heavily hints at the return of Bates, a pattern is already becoming evident in which Gaiman’s run is serving as a response to and refutation of Moore’s thesis. For Gaiman, the apocalypse has not brought forth a new creation; though the gods have come and the world is better for their labors, they have neither made earth a paradise nor brought heaven with them. That kind of apotheosis is beyond them. And like the petitioners of the last two issues, the reader too walks away disappointed.