Though they’d reject the labeling, the denomination in which I was raised and by which my seminary was run was essentially a Lutheran variant on Fundamentalism. While claiming to preserve the original interpretation of the biblical texts, much of their theology (particularly their cosmogony) was developed recently and in reaction to the growing scientific consensus throughout the nineteenth century regarding the geological age of the earth, the common origin of biological organisms, and to the emerging apparatus for historical textual criticism of the scriptures. All of which is to say, they are ardent Young-Earth Creationists, teaching from pulpit to pews and throughout their (accredited) universities the actuality of an antediluvian age very much like the one depicted in Jason Aaron and r.m. Guéra’s The Goddamned.[1]

I doubt my younger self could have appreciated the genius of The Goddamned while still clinging to the antediluvian as a historical setting instead of a fantasy one. But sans the religious reverence for the “accuracy” of its depiction, the inversion of the maltheistic Cain as the protagonist of the series, set on an inevitable path of conflict with the pharisaic Noahites, proves a fascinating theological commentary in its own right.

The latter abide the letter of the law, gather timber and tigers alike, but without any love for their fellow man. Noah’s sons are slavers, the kind whose cruelty would appall even antebellum plantation owners. They strip Lodo of his freedom and identity, rechristening him “Shit Bitch,” and cage him away like the livestock. Worse yet, theirs is the kind of cruelty which begets further cruelty; Lodo’s fellow captives, including the one-armed boy Cain saved in the first issue, are hardened inmates, harassing and attacking Lodo without provocation or purpose. Theirs is an evil as an end in itself, an unconditional hatred serving as the direct opposite of the agape absent in that world.

Cain is a man of contrition, the only denizen of the wastelands cognizant of his wrongdoings and feeling the weight of guilt upon his conscience. He bears no hope or even conception of redemption, only for a release from the ubiquity of violence and vice which only death could bring. And yet he alone has a love for love; he offers charity towards Aqa not towards any self-serving ends but because her maternal love for Lodo is reminiscent of the same shown to him by Eve. This valuation of love is why Cain tells Aqa not to waste her breath her breath on prayer:

He can hear you just fine. He hears everything. Every scream. Every Cry. Every Whimper. Every plea for mercy. For death. He Hears. He just doesn’t give a fuck.”

Cain refuses to serve a God as cruel and unloving as the men allegedly made in His image. He rejects both horns of the Euthyphro Dilemma, that God commands what is good because it is good, or that what God commands is good because God demands it. His misotheism, in this regard, is neither unfounded nor unrighteous. Later theologians, from Augustin to Aquinas, would reconcile the Dilemma as a false dichotomy: God’s being is simple, His nature inseparable from His will or action; that is to say, God is Goodness and Goodness is God. It is Noah, by failing to follow Goodness, that is the true maltheist, not Cain.

These sentiments regarding the seemingly impious Cain and the self-pious Noahites echoes those expressed by Jesus in his Parable of the Sheep and the Goats:

In this light, The Goddamned is a New Testament take on an Old Testament tale, less focused on the storm clouds gathering overhead a wicked world deserving of wrath, and more so on subverting the text to elicit in the reader a deeper contemplation of the question as to who actually constitute the sheep and the goats in our own postdiluvian period. 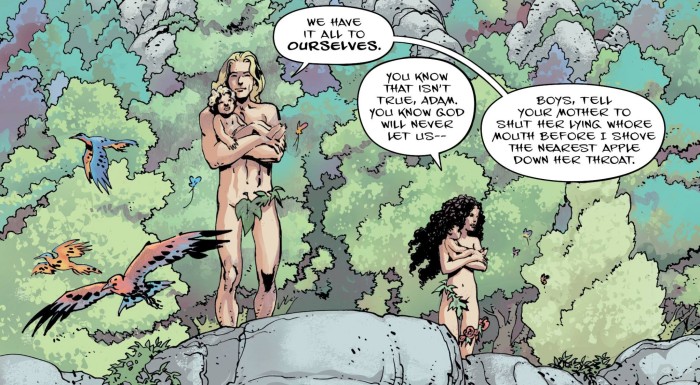 [1] It is to my shame that I was more than complicit in propagating such misinformation. Indeed, I was the most vocal vanguard for the view, singlehandedly and successfully lobbying to alter the geology curriculum to remove any reference to timetables in excess of ten-thousand years and adding to it the study of catastrophism and polonium radiohalos. Moreover, when I was appointed the youngest ever voting delegate to my denomination’s national convention, I was an outspoken member of the caucus to conserve and continue codifying the Creationist interpretation into the Synod’s official doctrines and teachings.

It was, ironically, the firmness of my faith in such doctrines which imbued me with the certainty that a dispassionate and disinterested investigation of the scientific data would be compatible with if not outright confirm the literalist interpretation of the Genesis account. And while for a time I wrestled to reconcile such, intellectual honesty prohibited me from clinging to unsubstantiated conclusions. It was in reading (in a Creationist journal of all places) on the continuity of accrued mutations along the genomes of primates and hominids that first caused me to seriously question the special creation of individual kinds. In later in learning of the dual centromeres and fused telomeres along human chromosome 2, resulting in twenty-three pairs of chromosomes among homo sapiens versus the twenty-four pairs in other primates, I began to actively proselytize to my former compatriots on the validity of naturalistic evolution.