I recently wrote the Wisecrack QuickTake on How the Philosophy of Avengers: Infinity War Predicts Avengers 4. I’ve read many of the comments on the video, and as quite a few of them addressed points from my original draft that were edited for time, I thought it prudent to expound upon them below.

The Mad Titan has a convoluted understanding of the Summum Bonum, echoing the economic philosophies of Thomas Robert Malthus, who postulated that finite resources impose an ideal population size, beyond which problems such as poverty and starvation – and therefore suffering – necessarily increase.

This is a stark departure from Thanos’ motivations in the comics, which was to woe the personification of Death herself. This is even hinted at in Thanos’ first appearance at the end of Avengers 1, when he smirks at the Other’s warning that “to challenge them is to court Death.” And honestly, even that explanation makes a lot more sense than the one in the film. With all six stones, Thanos is omnipotent; he could effortlessly create sufficient resources for every being in the universe if he so desired, so his plan to prevent a Malthusian Catastrophe doesn’t exactly hold water.

Marvel Studios has become somewhat allergic to any real romantic subplots in their movies, so it’s no surprised they decided to forego making Infinity War a straight-up romcom about Thanos and his star-crossed lover Death. Purportedly, the real reason for the change is that none of the previous films had familiarized viewers with the concept of metaphysical personifications, and that despite the introduction highly advanced alien Aesir and Dr. Strange’s world of quantum pseudo-magic, getting into Marvels pagan pantheon of personages such as Infinity, Eternity, Order, Chaos, and the Living Tribunal would have been a bridge too far, especially in a film so over-bloated by exposition and its ensemble cast already.

I don’t disagree with this conclusion, even if my personal preference would have been for a film that depicts, courtly, unrequited love from an ego-maniacal narcissist towards a particular platonic Idea by way of a feminine form. For some reason, I’s really able to relate to find that aspect of Thanos in the comics.

It was such a stupid plan

Even if Thanos thinks what he’s doing is right, the film clearly wants the audience to conclude that his actions are unquestionably evil and horrific. Thanos is no Eric Killmonger with some salient message for our heroes to take to heart. There’s never any evidence that the Malthusian catastrophe that ravaged Titan was about to occur on Earth or Xandar or even to the refugee Asgardians.

Contra Hickman’s Reed Richards’ – both the ultimately deontological Mr. Fantastic of Earth 616, as well as the ruthlessly consequentialist Reeds in the rest of the multiverse – who fearlessly face down the Malthusian Catastrophe, confident that it doesn’t take omnipotence to solve for such, just forward-thinking scientists.

In Fantastic Four #579, Doctor Richards condemns at a conference a Malthusian, stating “‘One Billion: The Optimum Population of Humanity‘ is the narrow vision of a dying man… It’s the speech of a coward.”

Every other Reed in existence – whom he meets and forms a Council of Reeds with (which, yes, is exactly the Council of Ricks, sans the cosmic nihilism and raging alcoholism) – they’re explicit goal is to “solve everything.” And they nearly do. They tackle Malthus’ concerns with much more aplomb than Thanos by building hundreds of artificial planets covered from pole to pole in wheat fields. And we know such is within the power of the Infinity gauntlet because the particular Reed whose pet project this is is the wielder of an Infinity Gauntlet. 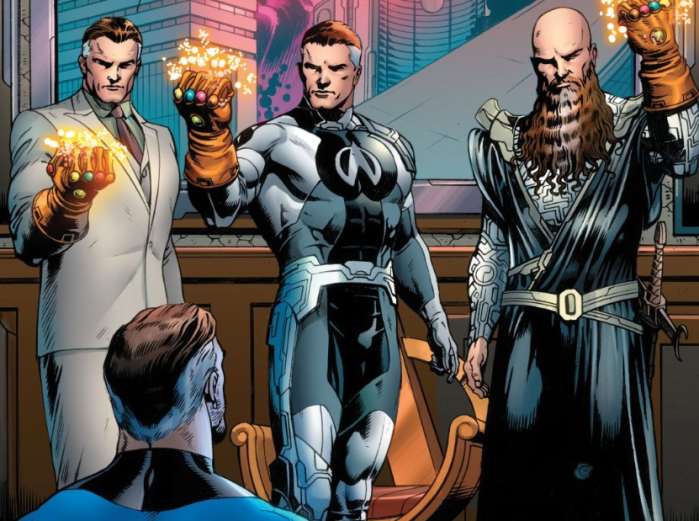 By far the most comments were one’s insisting that Doctor Strange decision to surrender the Time Stone was motivated not by a change of heart regarding the value of a single relative to a really powerful rock, but rather that Strange was continuing to operate according to a consequentialist moral calculus, with the good end of giving up the gem (as informed by his vision of fourteen million futures) justifying surrendering the stone.

There is much reason to think this interpretation right. Even if it doesn’t progress his character arc at all, this pivotal point creates a moment of ironic foreshadowing when he previously states so adamantly that he’d not hesitate to sacrifice Stark (or Parker) to protect the stone. Moreover, his lines “We’re in the endgame now” and “It was the only way” are clearly meant to lead audiences to believe that it was the only way to defeat Thanos. And if such ends up being the case, I’ll not be particularly shocked, or even all that disappointed.

But I still think the evidence leans ever so slightly towards the interpretation that Strange will be shown to have had a change of heart, that giving up the stone was the only way to save Stark’s life. Because this not only preserves the dramatic irony of his earlier statement, it additionally sets him on a path of character development that parallels those of other characters from the film. Combined with the fact that Hickman’s run was a clear inspiration for the film’s writers, and that their script evidences an understanding of the deontological argument infused throughout Hickman’s run, and it seems perfectly plausible that they would have kept the moral message of the film consistent by having Steven Strange’s path in Infinity War parallel those of T’Challa and Richards in New Avengers.

One thought on “The Moral Philosophy of Thanos in Avengers: Infinity War”