Every bit as much as Joseph Campbell and Edith Hamilton, I have always been a lover of mythology. I still remember clearly coming across a copy of Bulfinch back in third grade, devouring the tales of titans and gods from Greco-Roman writers. Finding Tolkien in middle school led me to scour the same Teutonic and Norse narratives that inspired his own Legendarium. Even into adulthood, playing Persona 4 Golden, one of the things I took away most was a newfound appreciation for the stories of Shintoism. And if I’m being completely honest, even when I was still in seminary I’d always been of the opinion that the mythological elements of Jesus’ life – the Virgin Birth, the Resurrection, the Ascension, etc. – are more compelling conceptually than their execution in the biblical books’ trite telling of events; give me Milton’s Paradise Lost and Regained over the synoptic Gospels any day. And yet – and I say this without a hint of irony – my favorite mythology has always been and likely always will be that of DC Comics. The latest installment of Geoff John’s Darkseid War in the pages of Justice League is emblematic of exactly why that is.

The story-arc’s central conceit – that at Darkseid’s death the boundaries between godhood and manhood would be briefly broken – has allowed Johns to heighten the mythopoetic nature of the League to a literal level, each character becoming more of what he already was. Luthor had always been the archnemesis of the perfect paragon, Superman; that the god of good should have as his antithesis not a mere mortal but the god of evil is only fitting. The fact that Luthor’s theosis occurred only after Johns had spent several significant issues imbuing the character with real pathos and seemingly honest (if somewhat mixed) motives as opposed to his usual vaudeville villainy renders his inevitable heel turn here to overt evil – proclaiming himself the heir of Darkseid and delighting in deicide – all the more earned.

But beyond the temporary transition of League members into honest-to-god gods, the greater purpose of The Darkseid War (and Johns’ entire run, as everything has been leading up to this since issue #1) truly seems the same as all classic theomachies – from Marduk slaying Tiamat in the Enûma Eliš to the kami begotten by Izanagi after his conflict with Izamani – namely, to account for the absence of the ancients and give genesis to a new generation of gods.

Like Hesiod’s Theogony (in which Gaia hides from Ouranos their son Kronos, who then kills his filicidal father, only then for Rhea to hide from him their son Zeus, who himself does the same), much of The Darkseid War has concerned itself with the death of the former pantheon at the hands of younger gods and the birth of new deities altogether. Dead are Darkseid and Mobius, gone the way of the Ouranos and Kronos before them. In their place a new New God is born, the son of Superwoman and Mazahs (Lois Lane and Lex Luthor of Earth-3). And all around this celestial cycle of divine deaths and new nativities, the gods wage war with one another. If the Justice League is the American pantheon (as been noted many times), then truly this is their Titanomachy*.

Darkseid and the Anti-Monitor were every bit as integral to geek mythology as Heaven and his son to Greek mythology. If this is truly DC’s sendoff of characters that have been instrumental figures in such modern myths as Crisis on Infinite Earths and Final Crisis, then it has been appropriately epic in its tone and scope. The other half of the theomachy – the birth and ascendancy of a god greater and more powerful than those before him, is equally well executed. The son of Superwoman and the Syndicate’s fiercest foe, from conception the child’s life has been wrought with danger, whether the Anti-Monitor’s annihilation of his home world, Ultraman’s deception into believing the offspring his own, or even Owlman’s machinations for the newborn on the battlefield. If great things come from humble beginnings, how much greater still that which comes from these great beginnings?

Already his part to play in this seems somewhat obvious. As the son of Mazahs, he almost certainly has Shazam’s same abilities to 1) transform immediately into a fully grown adult and 2) channel through himself an entire pagan pantheon. Presumably these would include the gods and totems temporarily in the League’s possession – the Black Racer, the Mobius chair, the power of Apokolips, etc. I truly cannot wait for next issue to be proven right on that prediction. 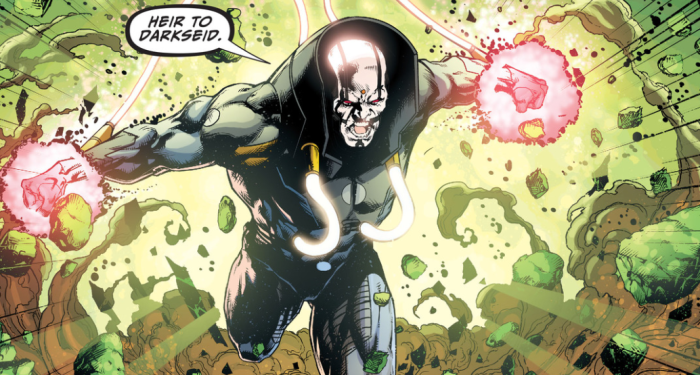 Jason Fabok’s art in perfectly realizing this mythology is truly indispensable. Fans for the first time ever last month glimpsed the Justice League in live action in true cinematic glory. While some might rightly criticize Man of Steel and Dawn of Justice’s desaturated palettes, Zack Snyder’s cinematography is otherwise second to none in the industry. And yet Fabok’s pencilwork perhaps exceeds Snyder’s camerawork in bringing the Justice League to life.

In two weeks’ time, the failed experiment that was the New 52 will finally come to a close less than five years after its arrival. And yet despite the disappointment from most every title throughout that time, comic critics and historians will be universal in their agreement that, along with Morrison’s Action Comics and Scott Snyder’s Batman, Johns’ run on Justice League will be looked back upon not merely as a rare bright spot in an otherwise dark chapter of DC’s history, but as a masterpiece in any age which will surely endure the test of time, one of the defining myths in the American mythology. With The Darkseid War, Johns is ending that epic even stronger than he started it.