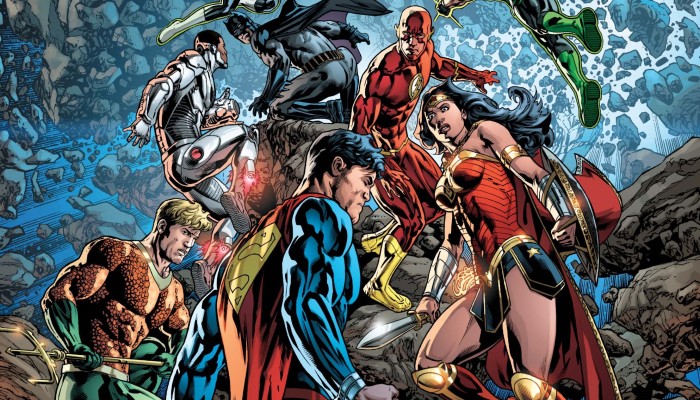 The plot of Justice League thus far has been needlessly convoluted. As such, a brief recap strikes me as appropriate.

An invasive alien species named which travels via wormholes from star system to star system, devouring planets to their cores, has made their way to Earth. These are The Purge, so named because they exist to eradicate human life from existence – not merely homo sapiens, per se – but rather the multitude of humanoid species which by convergent evolution proliferate throughout the DC universe (e.g. Daxamites, Earthlings, Kryptonians, Rannians, Thangarians, etc). Moreover, this Purge is somehow connected to Cyborg, almost certainly serving as the source of the technology which rebuilt Victor Stone and communicating on a network he can naturally access.

The mysterious Kindred have times innumerable sought to repel the Purge by means of a “Song” through which they commune directly with the cosmos. In all previous attempts, without exception, they have failed in this endeavor. As a failsafe, prior to even the first primordial prokaryotes, four massive machines were placed equidistant from one another within the Earth’s outer crust along the four cardinal directions, the purpose of which were to generate earthquakes so severe the Earth would rend itself apart – thereby robbing the purge of its mineral resources to mine and of its human population to assimilate, not too dissimilar from the technique of burning large swaths of forest in order to control the spread of wildfires. As soon as the Purge arrived, these devices of devastating destruction automatically began to cycle on.

Earth’s heroes, specifically the members of the Justice League, have mounted a more effective response to the Purge than on any previous planet. The Flash has dismantled every single one of the drones which had touched down planetside while Green Lanterns Simon Baz and Jessica Cruz travelled to the far side of the wormhole to halt the invasion altogether. Meanwhile, Wonder Woman has attempted to appeal to the Kindred to spare Earth from destruction even as Superman has traveled to the core to prevent Earth from exploding the way of Krypton.

This last point seems to hit upon one possible motivation Hitch may have had for pursuing this storyline. It’s afforded him the opportunity to potentially flesh out the mythology of several members of the League. No past storylines regarding Krypton’s destruction explicitly mention the Purge or subterranean mechanisms of prehistoric providence, but the similarities of increased geological activity followed by an Alderaan-like level of annihilation strongly point to a common connection. More explicit are Wonder Woman’s near kindship to the Kindred, discussed in greater detail in issue #3. Aquaman likewise shares a connection not yet fully explored, which at the very least goes beyond merely his Atlantian ancestry, as he alone among the merfolk is able to hear the song of the Zodiac crystals, which he here calls the song of the Earth itself. And as aforementioned, the long mysterious source of Cyborg’s technology is strongly implied to derive directly from the Purge.

As to the more general mythology of the DC universe as a whole, the Purge’s genocide against the myriad of species bearing the human morphology brings to the forefront a feature of the DC universe which has been present since the publication of Action Comics #1 back in June of 1938, and which in the intervening decades has gone largely unaddressed. I above attributed this to convergent evolution, but such is clearly not the sole cause. It’d be quite an accident indeed that the planet on which life first formed (Earth), the planet in which biological life began (Maltus), and the only pan-universal planets (Apokolips and New Genesis) brought forth by chance intelligent species outwardly identical in all but skin color. But the new revelations in this issue increase the improbability a hundred million fold. Evidently, billions of humanoid species exist in the DC universe. Hopefully Hitch will address what exactly makes this morphology so uniquely special that a preponderance of intelligent life conforms to this form, including the gods themselves. Moreover, what are the Purge’s motivations for attempting to alter all humanoids as “not human” (as Cyborg put it), and is such in direct response to humanity’s special status?

I fear Hitch’s ambition in addressing such significant aspects of the mythology of the DC universe exceeds his skill as a storyteller. Much of the series thus far has been scenes of insensible action followed by brief excepts of inexplicable exposition, breadcrumbs of revelations doled out at regular intervals to pad out the plot and preserve its mysteries longer than they actually merit. Hitch raises interesting ideas, but their presentation is poorly paced and mired in melodrama. “The Extinction Machine” may well prove immensely consequential to the mythologies of various League members and the DC Universe as a whole, but if few readers remain due to its dearth of quality, the ideas it establishes will not matter much in the minds of fans nor future writers alike.