Just as Klaus has recently been incorporated into my Christmastide traditions, and Promethea #11 is always appropriate come New Year’s Eve, required rereading for my birthday each year is Alan Moore’s seminal Superman Annual #11, “For the Man Who has Everything,” given that it’s about a particularly memorable birthday for the Last Son of Krypton (though the issue never addresses how it is that Kal-El actually knows which day it was that he was born, or how that information would even be meaningful given the different rotational periods and orbital cycles of Earth and Krypton and the lack of simultaneity between the two planets due to time-dilation). As I read through it once again on Monday, I could not help but think of Francis Manapul’s current run on Trinity, which had been taking obvious inspirations from the Annual, specifically the inclusion of Mongul and the dream-inducing Black Mercy plant.

Yet in reading Trinity #5 the next day for review, it final became evident that Manapul’s opening arc is in fact a direct sequel to “For the Man Who has Everything,” picking up where the latter left off with the warlord or Warworld at the mercy of the Black Mercy, somnifaciently slaughtering spectral Supermen. I’d have bet my back-issues that this version of Mongul had been freed from the fiendish flower at some point in the intervening three decades since the Annual’s initial publication, but given the number of reboots and retcons during that time, including the most recent relaunch with Rebirth, I’m just going to blame Barry Allen for any and all continuity flubs and fixes from here on out. Indeed, I’d be more than happy for DC to finally abandon the concept of continuity altogether, but given the unprecedented number of editorial asides present throughout this series (at least in recent memory), it’s clear that Manapul (or his editor) does not share that same sentiment. Trinity’s first five issues are lousy with callbacks to past comics, not merely “For the Man Who Has Everything,” but also “Poison Ivy: Cycle of Life and Death” and the respective solo series of the titular trio, as utterly unnecessary as these attempts at a coherent continuity may be.

Otherwise, if we were to concern ourselves with continuity, what are readers left to make of Batman’s comments informing Superman regarding the League’s intel on Mongul, despite the Man of Steel clearly demonstrating pre-existing knowledge of the jaundiced giant. In incorporating the Annual to the post-Rebirth timeline, readers may reasonably assume that this Batman and Wonder Woman retain recollections of the events therein. But what of Superman? “For the Man Who has Everything” was not merely pre-Flashpoint, but pre-Crisis even, indicating that the post-Crisis Superman depicted here in Trinity never himself experienced those events. Were this Bruce and Diana battling alongside the recently deceased New 52 Superman then, in a new and unseen version of the Annual’s events? The timeline to Earth Prime post-Flashpoint is supposed to be an overwriting of the timeline to New Earth of pre-Flashpoint, so how is even that an event from the Earth-1 of the original incarnation of the multiverse was incorporated into such? 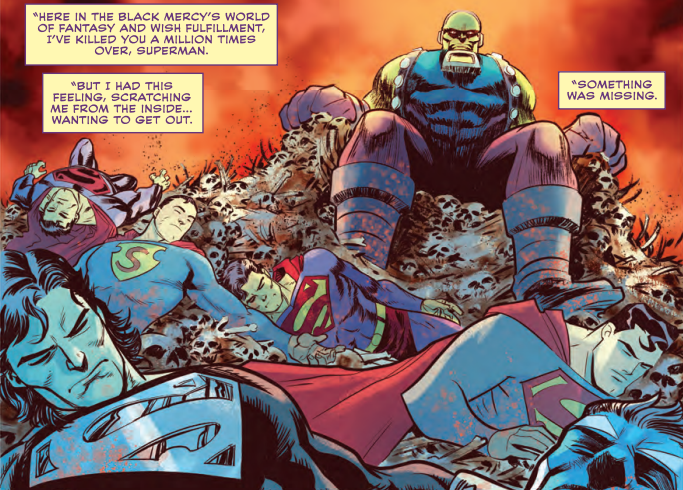 These are the logical puzzles and paradoxes that the multiverse was first introduced to explain away, and then destroyed in Crisis on Infinite Earths to do away with. Neither succeeded, with DC attempting again and again ad nauseam with increasing frequency to clarify where their imaginary stories stand in relation to one another, continuing on with Zero Hour, then Infinite Crisis, Flashpoint, Convergence and now Rebirth. And still they have not succeeded.

Personally, I love the metanarrative of the multiverse that began in the original Crisis and has weaved its way through current classics such as Final Crisis, Multiversity, and the Darkseid War. It’s a great set of stories in themselves, but they don’t need to exists in the background behind series such as Trinity. It’s clear that Manapul was interested in continuing on where Moore left off 32 years ago. There’s no reason the continuation of that story had to feature the universe-displaced Dad of Steel. Rather, DC should regard certain seminal stories – e.g. The Killing Joke, Death in the Family, Death of Superman, etc. – as myths with which all readers are familiar, and if such are important to the specific story an auteur is writing, then vague allusions are in order. Otherwise, each and every run should be its own universe, its own timeline, its own imprint even, much like the digital firsts Adventures of Superman, Legends of the Dark Knight, and Sensation Comics Featuring Wonder Woman.

Admittedly, Manapul has utilized the constraints of continuity in interesting ways, but, for example, Poison Ivy becoming connected to the Green is hardly a necessary component to the story when her florapathic powers would naturally give Pamela a narrative association to the Black Mercy flower. Manapul in part enriches the story by weaving his single strand into a grand tapestry, but at the same time that tapestry has become so tattered by innumerable needleworkers unthreading one another’s labors like Penelope that whatever benefit such brought to Trinity is entirely negated.

Trinity is bold in attempting to continue a beloved work by Moore (cf. Before Watchmen and the reaction thereto to see the fire towards which Manapul has willingly run), and is an earnest sequel to “For the Man Who has Everything,” benefiting greatly from its connection to that classic but hindered (or at least not helped) by its connection to the current continuity. 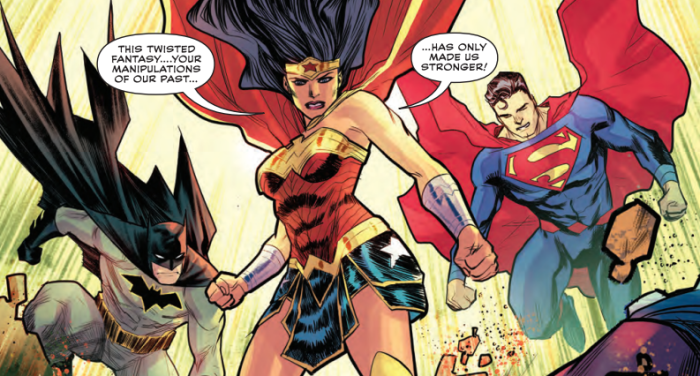