Such is the question a little girl named Naomi asks Santa in Grant Morrison and Dan Mora’s one-shot Klaus and the Witch of Winter. Whereas their prior miniseries starring the classic Christmas character offered a truly unique telling of his origin some several centuries ago, this holiday special catches up with Klaus in modern times, its central question being the same as Naomi’s: Why should anyone believe in Santa?

I remember with vivid detail the days in which I mistakenly mistook the lights of a plane passing far overhead on Christmas Eve as belonging to none other than a certain red-nosed reindeer. I recall clearly being so certain that the noises I heard outside that night, wide-awake with sleepless anticipation, were in fact coming from the roof of our house. I still think about the time my family made the pilgrimage to Manhattan to meet the real Santa – not the one from the local mall who I’d always known was a counterfeit, but the real one up at Macy’s on 34th Street.

I truly and genuinely believed with all my heart in the jolly old elf and the eight flying reindeer and all the rest. What finally made me lose that faith wasn’t having the secret spoiled by siblings or classmates; it wasn’t finding the presents stashed away in my parents’ closet; it wasn’t catching mommy kissing Santa Claus underneath the mistletoe. Rather, it was the whole host of holiday specials screaming at me to believe in Santa Claus, The Santa Clause and Miracle on 34th Street most of all.

While the message of the films is ostensibly that this yuletide figure merits out belief, their premise is that the default position of adults is that he’s fictitious. Neither film, nor the myriad of similar seasonal movies, ever reconciles the grown-ups’ indifference to the appearance of presents each Christmas morning with their ardent dismissal of the gift-giver’s existence. In The Santa Clause in particular, none of the incredulous adult authorities are challenged on the question as to provenance of the presents under every tree each Christmas morn. Such lack of logical consistency and default disbelief, my young mind reckoned, must mean that adults have good reason for not believing in Santa, that reason being that he’s not real.

Another damning piece of evidence came from the classroom, where, as educational and enlightening as the lessons on Christmas customs in other cultures was, the information that Santa’s appearance, mode of transportation, and level of generosity differed according to geography did nothing to engender belief in him.

Morrison must have asked the same questions himself, because his modern-day Klaus story utilizes such apparent problems with the mythology to build it out more imaginatively than ever before. Why don’t adults believe in the existence of Santa even in a story which presupposes that he’s real? Because he hadn’t been delivering toys for years, relegating that duty to parents generations ago when the population grew too large, and in the interim fighting in a civil war on the moon. Because of course he was. Why do so many cultures have different conceptions of how he appeared and accomplished such gift-giving? Because those other yuletide figures were Pinocchio-esq automata which he built and brought to life with none other than Geppetto himself. Naturally.

And these particular revelations are relegated to just the first few pages of this oversized one-off. Throughout the rest of the issue, Morrison continues to carefully pull elements from various mythologies and incorporate them seamlessly into the Santa story he began in the Klaus miniseries. The aforementioned golems Geppetto had made include also an army of Wooden Soldiers, inspired undoubtedly by the oldest classic Christmas movie, Babes in Toyland. The titular Witch of Winter, who I mistook at first for Morrison’s take on Jadis, the White Which of Narnia (where it’s “always Winter but never Christmas”), actually hails from his own native Scotland, where they tell of a crone called Cailleach. Frost Jötunn out of Norse myth seem similarly fitting foes for Klaus to fight in his former artic abode, given Klaus’ own connection to Norse culture (being basically a bad-ass Viking version of Santa).

Even modern mythology is borrowed from. In my reviews of the first issue, I explored the influences which Superman and other costumed-heroes had on Morrison’s Klaus; those influences are as obvious as ever here. Santa’s throne room is half Fortress of Solitude, half Bat-cave, replete with giant statues, old costumes encased in glass, and trophies memorializing adventures only alluded to. The most obvious moment of all, though, comes when Klaus shatters the steel chains binding him with a flex of his mighty chest; the only Superman pose more iconic is Clark ripping open his suit to reveal the “S” insignia underneath, and I imagine Morrison must have been racking his brain for a way to have Klaus do the same in a situation where such would make sense for the character. 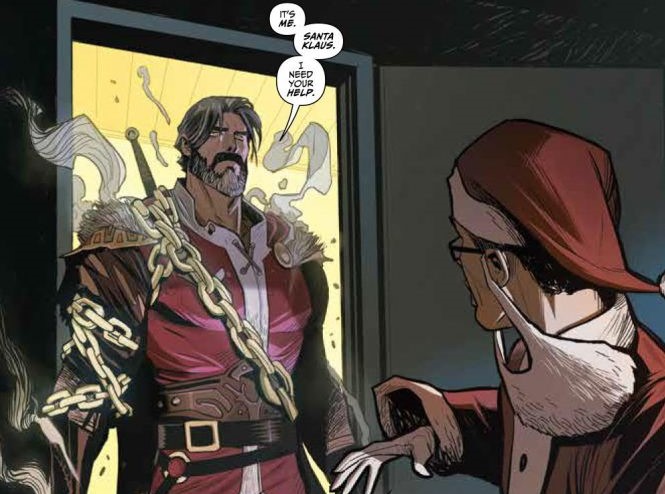 The most rewarding reference, however, is one which Morrison makes to his previous work on Klaus. A single panel in the penultimate issue shows the Shinning Family presenting Klaus with three runes from the Anglo-Saxon fuþorc, only the middle of which is given a translation in the text (Gyfu, meaning “gift,” with readers needing to return to the second issue to be reminded of such). Independent research on my part produced a possible translation of “fire” for Cweorð, the third rune, but this was never verified in the series’ concluding chapter. It seemed to be, at best, a very deep cut that only myself and a most a handful of other would ever pick-up on, if it was intended at all. From my review:

“It may simply be that Morrison wanted to utilize three runes, and his options as to the third were severely limited. If he did in fact intend Cweorð to be translated as ‘fire,’ such was certainly for fire’s associations with the yule log, the hearth which warms the home in winter, and the light in the darkness which fire brings, similar to the solstice bringing about the return of daylight and the lessening of darkness.”

This unresolved and seemingly insignificant plot point from the miniseries ends up becoming the hinge on which the whole story turns in this one-shot. Klaus confirms that Cweorð was indeed the Fire rune, and Morrison reveals its meaning to be exactly as my exegesis proposed. A blaze of his own making burning about him, Santa states, “The dark of the year is under my protection.” To this, another character – icy heart melting from the magic and metaphor radiating from this inferno – inquires, “Has the blossom come, then. Are the flowers in bloom? Does the sap stir in the trees and the ice turn to tears? Does the cold heart break? Has renewal come?”

Secularly speaking, this is the true significance the Christmas and all the holidays surrounding the Solstice, such as Saternalia and Yule. That as the dark of night has reached its zenith, men can rejoice at the return of light with each passing day and have hope that it in turn will soon bring Spring. That Morrison can hit on this point so precisely while still accomplishing such superlative world-building, avoiding the logical and thematic inconsistencies of so many seasonal specials, and telling a thrilling tale in its own right speaks volumes of his skill as a storyteller. Not that such was ever in doubt. It’s merely to say that Morrison’s done it again!

Midway through writing this review, I received a large parcel, inside of which I discover about a dozen or so presents from my parents, wrapped and ready to be opened on Christmas morning. I’m definitely looking forward to what seeing what Santa sent them to give to me. But excited as I am, I have to thank Grant Morrison and Dan Mora for giving me early what will certainly prove to be the best gifts I receive this holiday. Already an annual re-reading of Klaus was planned as a new tradition starting this year. I’d been looking forward to such since before the series finished. But to have even more of one of the year’s best comics arrive as an unexpected surprise just in time for the holidays? That’s a genuine Christmas miracle!

2 thoughts on “Klaus and the Witch of Winter”