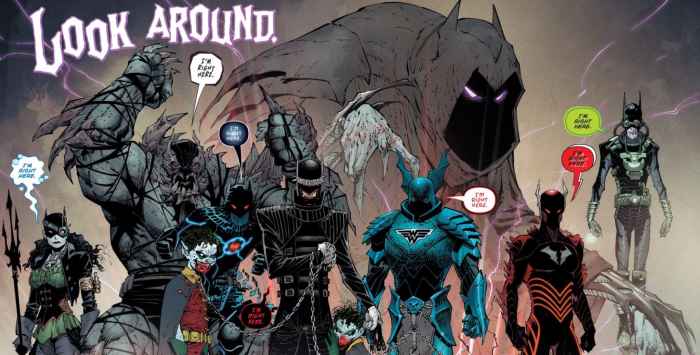 Riddle me this: What does Batman* – and by extension writer Scott Snyder – mean when he claims that an ancient order known as the Strigydae was performing an act called “the Mantling”? The in-universe explanation is that the Strigydae are an ancient order of priests which worship Barbatos, and the Mantling their years long process of infusing five mysterious metals into Batman in order to “weigh down his soul.” Such explains the perfectly why the plot proceeds as it does in Dark Nights: Metal #2, but offers no insight as to why the specific nomenclature of “Strigydae” and “Mantling” was selected.

Strigydae is an alternate rendering of Latin word Strigidae. The root comes from the ancient Greek στρίγξ, whose primary meaning is “owl”, with a derived definition of “witch.” The suffix -idae is a Latin patronymic derived ultimately from the Greek ειδής meaning form or appearance (from which we get “idea” and “eidolon”). In taxonomy, the family Strigidae are known as the True Olws, one of the two main branches of owls (order Strigiformes), the other being barn owls (from which the Court’s masks take their appearance). Hence, behind the machinations of the Court of Owls –  whose history only dates back to the colonial era – lays the True Owls, who’ve been set against Batman since the first tribes of men walked the earth during the Paleolithic period.

“Mantling” describes the stance of a bird of prey – such as falcons, hawks, or, most relevantly, owls – as it haunches over a fresh kill, its wings outspread. Its usage here derives from “mantle,” a specific part of the plumage of particular species of birds. While not etymologically connected, the homograph “mantle” may be defined as “something that covers, enfolds, or envelops,” e.g. “the mantle of darkness.” Thus, as Strigydae are enveloping Batman in these metamorphic metals, they are haunched over their prey in victory.

Every great Batman story is a detective story. In his narration on the very first page of Dark Days: The Casting, Carter Hall tells the reader that this is going to be exactly that. Snyder is exacting about the clues he lays down for the reader to pick up, and as proven in the previous issue of Metal, (to say nothing of his New 52 era run on Batman). The etymology of the nomenclature he uses is frequently an important piece of evidence in piecing together the full picture.

None of which is to say that the importance of such to the story will be immediately obvious. Snyder is a master of the longform narrative, planting seeds years in advance. Barbatos’ introductory appearance in the pages of Batman the Return of Bruce Wayne concluded at the end of 2010, just prior to when Snyder would have begun preliminary planning for his run on Batman beginning in September of 2011, starting with the first arc, The Court of Owls, in issue #5 of which Bruce ingests the first of the five metals, Electrum. Given such, one suspects that Snyder’s initial idea for the Mantling was near fully formed as far as six years ago.

Likewise, Snyder must have conceived the basic properties of Dionesium no later than the third arc, Death of the Family, in which the Joker first fell into the rejuvenating admixture. Though no association with Promethium is mentioned prior to this issue, Batman’s final machine was in Snyder’s thinking at least as far back as Detective Comics #27, in the superlative short story “Twenty-Seven.” And the idea for Batmanium, seemingly a throwaway idea when introduced in issue #45, proved to be the namesake of the entire Superheavy arc. By then, between the Electrum in Court of Owls, Dionesium in Endgame, and Batmanium in Superheavy, the metal motif in Snyder’s meta-narrative should have been obvious to a more observant detective. It was, to quote Damien in this issue, “Elemental.”

During Zero Year, I refused to flip the page until I solved Nygma’s riddles for myself. Back then, I too often forfeited in frustration. But I’ve no intention of waiting for the full revelations to of Snyder’s story to be spoon fed to me anymore. His past works prove that the clues are there for those who, like Carter Hall and Batman himself, are willing to do the hard detective work to solve the mystery. Thus, I’ll continue to dissect with the exacting eye of a forensic specialist the etymologies of words, the meanings and motifs, and any other clues I come across. Snyder’s sensational storytelling in Dark Nights: Metal is of course reward enough, but the chance to crack the case while working alongside the World’s Greatest Detective adds all the more satisfaction.

*Technically this is Clayface speaking, but in the guise of and informed by Batman, whom the reader is meant to think is saying such.

2 thoughts on “Playing the Detective in Dark Nights: Metal #2”