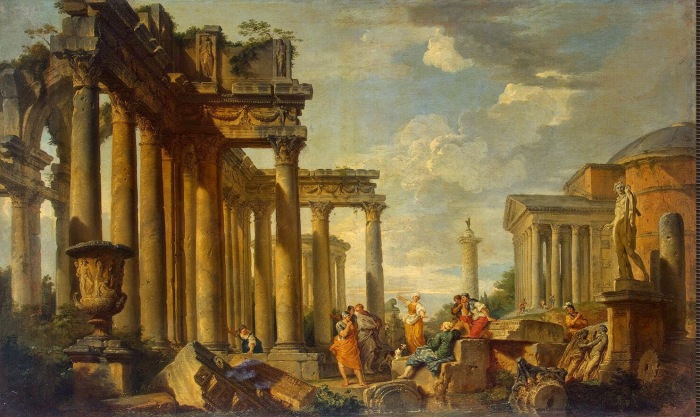 Edward Gibbon devoted his final chapter of The History of the Decline and Fall of the Roman Empire – often hailed as among the greatest works of history ever penned – to enumerating the various causes as to the annihilation of nearly all of antiquity’s artwork, architecture, and statues in the ruined city of Rome. His reason for introducing this new theme on the physical structures of the city in the concluding chapter of the whole work was two-fold.

Firstly, the few monuments which remained were all that endured from era of the Empire into the present period, and as such bridged the gulf between antiquity and modernity, allowing modern man to gaze upon with his own eyes the same sights seen by the denizens of Rome from more than a millennium before; to witness the same Colosseum as the Caesars and Augusti, the same Column as Trajan, the same Parthenon in which the pagans prayed. These were therefore no inanimate objects, but rather living pieces of history, secular relics no less sacred than those stored in the Vatican.

Second and more importantly, the impoverished inheritance of the present period with respect to such structures – regarding both their abject condition and the minuscule number remaining – was a damning indictment as to mean and savage state to which the citizens of the city – once the capital of Civilization itself – had in the intervening centuries degraded. Gibbon quotes the poet Petrarch, who upon visiting the city wrote:

Behold the relics of Rome, the image of her pristine greatness! neither time nor the Barbarian can boast the merit of this stupendous destruction: it was perpetrated by her own citizens, by the most illustrious of her sons.”

The laurate’s words here are truly tragic. It is the mark of a civilized society to create great works of art and architecture; it is the mark of barbarism to vandalize, pillage and destroy such. The tearing down of historical monuments marked the once civilized citizens’ decent into dark and brutish barbarism.

For us citizens of current-day America, this is no matter of historical curiosity. The numerous instances of vandalism and destruction called for or already committed this last month evidence an eagerness to follow the denizens of Rome along the same self-destructive path from civility to savagery.

In Durham, North Carolina, a mob gathered on the night of Monday, August 14th to tear down a bronze statue of a soldier which stood on the lawn of the county’s courthouse. That same day, hundreds converged on the Natural History Museum in New York, oblivious to the irony of their demands to censor and sanitize an aspect of history with which they took offence as embodied in the statue of President Theodore Roosevelt. That Wednesday, the Vandal hoards ravaged particularly close to home, damaging two monuments in downtown Wilmington, North Carolina, where I vacation several times annually to visit family there.

The Federalist’s Bre Payton  compiled a list of other works of art marked for destruction or denigration. Most notable are Al Sharpton’s argument for the public to no longer preserve the Jefferson Memorial, Minority Leader Pelosi’s call to remove two other monuments from our Capital, and – perhaps most frightening – a Vice writer’s want to raise one of our nation’s most iconic wonders of the modern world, Mount Rushmore.

Readers of all political persuasions will no doubt be wondering as to why I’ve not made explicit reference as to the thematic unifiers which these statues seem to share, or the catalyst which the prior Saturday created this current cultural milieu of vandalism and destruction. That is deliberate, because those factors do not matter. Civilized society can be no more in favor of tearing down the sculpture in Seattle of Lenin than we can about statues dedicated to Washington, Jefferson, Stonewall Jackson, Lee, or even Lincoln*.

All art is valuable for its own sake, even when we fundamentally disagree with the cause for its creation or the message it makes. As such, it is our duty to posterity to preserve the works of the past from the prejudices of the ever-changing present moment. What is seen as beyond the pale today may become tomorrow a mere curiosity, valued not for its original intent but rather for its artfulness and age alone. Consider the case of the Christians after Constantine’s conversion, as recorded by Gibbon:

The statues, alters, and houses of the dæmons were an abomination in their eyes; and in the absolute command of the city, they might labor with zeal and perseverance to eraze the idolatry of their ancestors.”

No civilized man today relishes in the loss of those pagan artifacts, or would not wish them returned and restored. Not in order to prostrate ourselves before false idols, as per their original purpose, but merely to appreciate their artistry and antiquity and by them become reconnected to such. Let us not likewise deprive future generations of sites such as Rushmore simply because today’s religious zealots similarly wish to erase the idols and idolatry of their ancestors.

For that is who is initiating this iconoclastic fervor: adherence of a new, “secular” religion whose dogma is intersectional identity politics. They have launched an inquisition that will inevitably find all of human history guilty. Thus, even when we agree with their pronouncement that a particular historical person was guilty of gross immorality (as all of us would agree owning slaves constitutes), we must oppose their sentencing of any art to the flames of destruction, and even oppose their attempt to hold a kangaroo court over history in the first place.

All human beings are, in a sense – to borrow a phrase from Luther – simul justus et peccator; simultaneously saints and sinners. Without suggesting any equivalence, nevertheless those who wore the Blue and the Grey, slaves and slave-holders, the extremists in Antifa and the Alt-Right and those of us centrists caught in their crossfire, we are all of us complicate creatures, neither entirely evil, nor entirely good (“There is none righteous, no not one”).  But if we try to separate the wheat from the chaff, we’ll end up burning down more than we build up. Let us not become as did the Romans, so zealous to forget the sins of our fathers that we imbrute ourselves, barbarians standing amidst the remains of a once great civilization that we ourselves will have reduced to ruins. Instead, let us learn the lessons of history, lest this past week should prove the latest chapter in The Decline and Fall of the American Empire.

*Who also bears the stain of sin by the standards of this Vandal hoard, having said in a debate “I will say then that I am not, nor ever have been, in favor of bringing about in any way the social and political equality of the white and black races.”