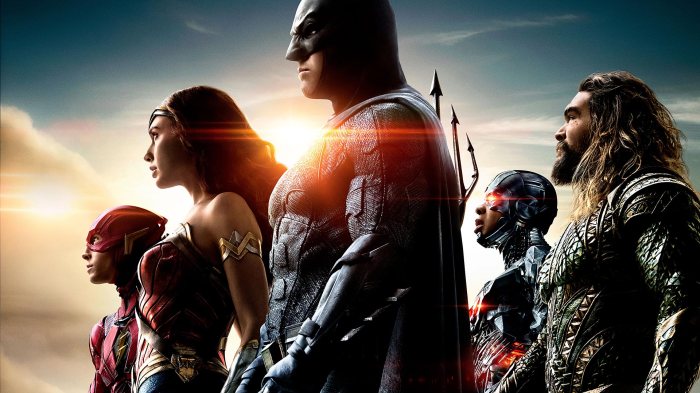 I’ll say this much for Justice League: there was rarely a moment while watching the movie when I wasn’t wearing a wider smile than the Joker himself. Part of that was due to the sheer joy of finally seeing – after a lifetime of high hopes and false starts and eager anticipation – DC’s entire pantheon share a single screen. As the culmination of phase one in a cinematic universe, it may not have the same novelty as the Avengers’ first film from five years back, but the greater cultural capital of iconic characters such as Superman and Batman affords it a gravitas all of its own. And moreover, even bearing the weight of such expectations, it executes well enough upon its central conceit of bringing these classic characters together.

One the other hand, Justice League represents a retreat from DC’s earlier efforts to differentiate itself from the Marvel method of making movies, with the former aspiring to approximating authentic cinema over and against the purely populist popcorn flicks of the MCU. Such was the long legacy of DC on the silver screen, starting with Donners’ Superman, which blended an almost old-world Shakespearean style in its scenes on Krypton, a Rockwellian hominess in Smallville, and a decidedly modern Metropolis, all to craft a heroic epic that captured the full breadth of the American experience. Nolan’s Dark Knight films were carefully constructed commentaries on complex issues such as the War on Terror and the Occupy Movement. Even the initial offerings of the DC cinematic universe stove to artistically argue each for a thesis; Dawn of Justice presented a compelling theodicy successfully reconciling the seeming contradiction of a God who’s all-loving and all-powerful with a sinful world, and Wonder Woman was a sober and surprisingly misanthropic meditation on mankind’s inherent fallenness.

Not so Justice League. In capturing the fun and levity of a Saturday morning cartoon it likewise captured the artistic integrity and intellectual sophistication of such, or lack thereof. Nowhere is this better seen than in the film’s antagonist, Steppenwolf. Former DC villains had complex ideologies motivating their actions. Luthor’s antitheism cast him as a man finding fault with God. Ares’ harmatology cast him as a god finding fault with Man, a classic Satanic accuser straight out of Job. Contra Steppenwolf, a cackling conqueror bent on destruction, bearing all the depth of Gargamel or Skeletor.

If anything, the League members themselves are more complex villains than the outcast New God of Apokolips. Batman’s Frankensteinian fever-dream of revivicating Superman is rightly met with skepticism, his teammates raising both ethical and genre concerns. At one point Batman even utters the line “We don’t have time to debate morality,” which in any other film would be the dialogue delivered by the villain before his fateful transformation into an inhuman monster. The Flash even draws overt comparison to Pet Cemetery, indicating that cinematic conventions demand karmic comeuppance for such haughty hubris. And yet, despite a relatively harmless scuffle with Superman upon his resuscitation, the good ends of his assistance against Steppenwolf seemingly justify the questionable means by which the Man of Steel is returned to life.

Even more disappointingly, this resurrection is no Resurrection. Dawn of Justice had as its central motif Superman as a Christ figure. His death scene in that movie took direct visual cues from biblical imagery and religious art, specifically Guido Reni’s St. Michael Archangel and Michelangelo’s Pietà. Justice League is excised of any allusions, stripped of such symbolism. It has neither high arguments nor hidden depths. Beneath the gloss of color-correction and computer-generated effects is an altogether straightforward story of unambiguously good guys uniting to fight unambiguously bad guys. Far from an Americanized and action-packed repackaging of the Resurrection account, Superman’s revitalization is a mere plot contrivance meant to re-establish his presence in the DCEU. Worse, dropping the motif in-between films creates a discordant tone to the overarching narrative of the cinematic universe, one which feels less like an artistic decision on the part of Snyder and more so a mercenary reaction by Warner to the poor critical reception which Dawn of Justice wrongly received. And as a result, Justice League is – to quote Macbeth – “a tale told by an idiot*, full of sound and fury, signifying nothing.”

Beyond its frivolity, the film also suffers a pacing problem, primarily due to the significant portion of its all-too-short runtime that’s devoted in the beginning to introducing audiences to the various League members. Too much of the work which should have fallen to preceding solo films unfortunately fell to Justice League, and the result is a substantial number of scenes that in no way serve the plot other than to establish the various protagonists. In a non-franchise film (e.g. Pulp Fiction, Ocean’s Eleven, or Orient Express) the plot and characters are married much more closely, but here establishing the ensemble feels like a chore to trudge through while waiting for the meat of the matter.

The cast that bring those characters to life run a wide gamut. On the one end is Gal Gadot as Wonder Woman: a fresh face without any of the baggage of prior iconic roles, who looks the part of her comic book counterpart, and whose garb is sufficiently reminiscent of the classic costume. Jason Mamoa as Aquaman is not a casting call any comic book reader would have made for Arthur Curry, but he absolutely owns the role, stealing ever scene he’s in. Ben Affleck comes even more into his own as Batman, serving as the most direct translation of the character from the pages of the comic directly to the screen, sans Burton and Nolan’s need to filter him through realism and plausibility.

Ray Fisher as Cyborg is stiff and robotic in his delivery without once indicating that this is a deliberate portray of a half-mechanical man as opposed to merely a poor performance; moreover, the character’s inclusion only serves to make all the more conspicuous the indefensible omission of Green Lantern, a core and consistent member of the League over and against the Johnny-come-lately from Motor City. Henry Cavill still doesn’t know how to comb a proper split-curl or which side of his spandex to don his skivvies on (hint: the outside), and worse still fails to portray Clark Kent in a manner which suggest the full dichotomy of the dual identity, and now in his reduced role lacks the steely seriousness he had as Superman in his previous portrayals.

And all the way on the far end of quality from Gadot’s Amazon princess is Ezra Miller’s Flash, a role so poorly scripted that no thespian could ever act so powerfully as to redeem the writing, and so poorly portrayed by Miller that he’d have butchered the role even were his scenes scribed by the Bard himself. It is a perfect confluence of awfulness, all decked out in a hideous costume to boot. Barry Allen’s bundle of neuroses and phobias, his asocial awkwardness paired with overeager earnestness, all come across as pandering to the Big Bang viewing demographic, as if audiences would bore with heroes being too heroic.

The cinematography smartly shuns the drab realism of Nolan or even Donner, without ever descending into the gaudy glow of Schumacher, instead striking a happy medium that evokes the four-colored comics from which it’s inspired. More so than Man of Steel or Dawn of Justice, Justice League is the apotheosis of Snyder’s skillful translation of panels-to-film cells as originally evidenced in 300 and Watchmen, sans the crutch of slaving to a single source material.

Likewise, the film’s score combines Snyder’s penchant for the picking the perfect pop hit to accompany his montages with the classic orchestral compositions of Elfman and Williams, delivered with confident subtlety at exactly the right moments. It doesn’t surpass the unapologetic gusto with which Williams or Elfman scored Superman and Batman, respectively, but it does lend Justice League a wholly unique aural signature.

Justice League is the most enjoyment I’ve ever felt while being simultaneously disappointed. There was never a moment while watching that I was unaware that the film was failing to live up to the expectations intrinsic to the debut of the entire American pantheon sharing a single silver screen at long last – or even the expectations of the next chapter following the critically underrated Dawn of Justice – and yet nevertheless there was neither a moment where I felt anything short of utterly elated euphoria. Justice League is dumb and fun, and I love it like a parent loves their special needs child, fully aware of the intellectual shortcomings and nevertheless filled with joy to have it in my life.

*This is not in any way to suggest Snyder is an idiot. I’m among the most ardent defenders of his entire filmography, bar none. The anomalously low quality of Justice League’s story suggests to me that, over and against the auteur, idiot moneymen were making too many (i.e. any) of the decisions. Such is my suspicion at the very least.