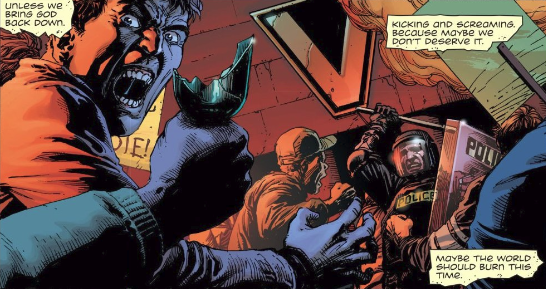 “He meets some fragment huge, and stops to guess

What powerful but unrecorded race

Once dwelt in that annihilated place.”

Any comic reader worth his longbox knows that Adrian Veidt chose his nom de guerre from Percy Bysshe Shelley’s same-titled sonnet about a statue of Ramesses II. A less well-known anecdote may be that Shelley’s occasion for penning the poem was a composition competition with his friend Horace Smith, possibly prompted by the arrival of a similar statute to one described by Greek historian Diodorus Siculus to the British Museum (also of Ramesses II, appellated Young Memnon).

The final three lines of Horace’s Ozymandias serve as the coda to issue #1 of Geoff John’s and Gary Frank’s Doomsday Clock, a twelve-issue spiritual sequel to Alan Moore and David Gibbon’s seminal series Watchmen. Next to the excerpt from the poem is a simple graphic of an analogue watch face, its hands at eleven minutes to Midnight. The poem and the glyph serve in an interesting juxtaposition to one another; the latter anticipating Armageddon and the former awestruck that such devastating destruction has already occurred – though the implication that annihilation is perennial, a warning against overconfidence in the stability of civilization, certainly has implications for the present period as well.

Indeed, this juxtaposition is woven throughout the entire issue. On the one hand, humanity is heading headlong once again towards the inevitable nuclear apocalypse which Ozymandias had hoped to prevent. On the other hand, the state of social decay implied to be the fallout from the revelations of Ozymandias’ actions towards that end themselves represent a sort of societal collapse. Even prior to the soldiers in Omaha authenticating the orders for a first strike, all that remained was already the ruins of a once thriving civilization.

This point is perhaps best demonstrated by the montage of newscasts in the opening pages of Doomsday Clock. Normally a tired trope best relegated to the ‘80s comics from which it derives, such here serves to convey stylistic and thematic continuity to Watchmen – much like the conventions of the countdown clock and accompanying quotation ending each issue, or the nine-panel grid structure to which all the panels conform. Much as Moore’s alternate history resulted in a dystopic 1985 which magnified the societal anxieties of his audience, so too is Johns’ 1992 a cracked funhouse mirror of 2017 here on Earth-33. Russia moves its troops through Eastern Europe even as its intelligence agencies work to undermine Americans’ confidence in the Office of the President. North Korea continues to develop intercontinental ballistic missiles with ever increasing long-range capabilities. Ideological echo chambers have Balkanized American society, fueling violent clashes between evermore extreme political partisans and police serving authoritarians. And all the while, the President puts around at his golf course.

In the face of such abject hopelessness, it’s not hard to see divine intervention as the only means of salvation. Especially since “God exists, and he’s American.” As “Rorschach” says, “Find God. Save world.”

I suspect this new Rorschach is Edward Blake, a.k.a. The Comedian. The first issue of Watchmen was all about his murder at the hands of Adrian Veidt; it’d be an appropriate parallelism for Johns to make his inaugural issue about Blake’s return to life, teaming up with Ozymandias no less. And no other explanation fits. It’s certainly not Kovacs beneath the mask, given Marionette’s shock at the revelation of his identity. That she inquires as to whether Kovacs killed Nite Owl also excludes Dreiberg from the list of potential candidates. And as Ozymandias is seen standing next to the new Rorschach, and both are searching for Osterman, they too are both precluded as possibilities.

If correct, Blake’s resurrection would be a fallback to that most overused of all superhero staples, all the more egregious due to Watchmen’s successful subversion of so many of those same tropes. Of course, it is always possible that such is Johns’ meta-commentary on the Dark Age of Comics that followed from Moore’s magnum opus, particularly 1992’s Death (and subsequent return) of Superman, much in the way that the original Watchmen deliberately recapitulated the Golden and Silver Ages in its backstory. Such is more subtext than Johns usually employs, but given Doomsday Clock’s status as a spiritual successor to Watchmen, it’d make sense for him to aspire to similar narrative heights as reached by Moore.

Of course, no one honestly expects Doomsday Clock to actually be the next Watchmen (if you want that, read Multiversity: Pax Americana #1 by Grant Morrison). And it’s those tempered expectations that render this first issue of Doomsday Clock a delightful relief. For a gimmick crossover between DC’s main universe and a brand better left untouched and unspoiled, it’s quite good for what it is. Helping matters is that Gary Frank is doing the best work of his career (though he still has his individual idiosyncrasy of overdrawing faces, especially mouths, resulting in weird wrinkles on all his characters, even children and – in other artists hands – attractive women). Though like many comic critics I have a bad tendency to not give colorists their proper due, Brad Anderson’s work on this issue refuses to be overlooked. His dynamic gradiations are the most significant stylistic departure from the flat tones of John Higgins’ in Watchman, rendering Doomsday Clock a clearly modern comic, but the pure pulchritude of pigmentation in every panel makes evident that this was the right direction for the series.

After months, years, even decades of this strange admixture of apprehension and anticipation for the inevitable continuation of the Watchman narrative, Doomsday Clock #1 does not disappoint – so long as one is willing to judge it on its own merits and is not looking for Moore to revolutionize the world again (for that, go read Jerusalem).