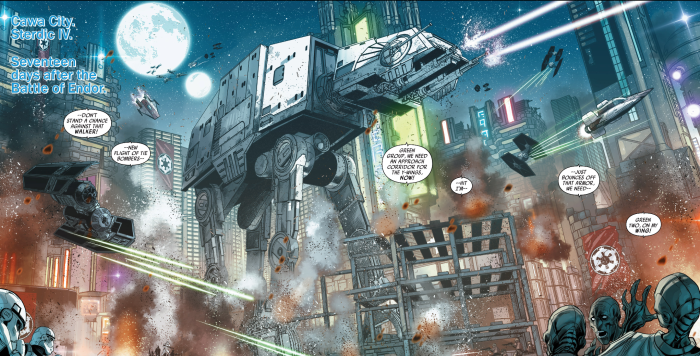 I have a confession to make: I’m not particularly excited about The Force Awakens. I’ll be seeing the film opening night, of course, waiting hours in line if need be for center row seats to the first IMAX 3D showing available. But as I’m waiting in line, it will be with no small measure of apprehension and a growing sense over the past many months that this film isn’t being made for me.

You know what I am excited about? Feverishly rabid in my anticipation of, in fact? Each new issue of Shattered Empire. So far, two issues in, it’s not dissapointed.

Issue #2 picks up several weeks after the first. Gone are the days of guerrilla hit-and-run tactics on the part of a Rebellion just trying to survive the constant threat of annihilation at the hands of ubiquitous imperial might. Now the Alliance to Restore the Republic is fighting to do just that, through military offensive and shrewd diplomacy, both of which are depicted in this issue, seen through the eyes of pilot Shara Bey.

After the deceased Emperor continues to make his presence felt through posthumous order to execute Operation: Cinder, the issue opens with the Battle of Sterdic IV, already in progress. Though it is true throughout the issue, it is especially here that Marco Checchetto’s art absolutely shines. It bears all the “used-future” visual motifs which fans of the original trilogy have always loved, but also has detail and scope that rivals the most special effects ladened shots of the prequels.

There is simply no weak point in his suburb visual rendition of the Star Wars universe. Every panel has a full background which must have been painstakingly drawn. Space is rendered naturalistically, avoiding the ostentatious display of planets and nebulae and Kirby-esq energy with which comics usually color the great void. Vehicles move with a sense of speed that goes far beyond the motion-lines which have served as a symbolic shorthand for such, evoking that same awe as when the Falcon first jumped to lightspeed. Luminescent object glow, reflective surfaces really reflect, explosions burst into hundreds or thousands of pieces of debris… the sheer attention which Checchetto has shown to each and every panel boggles the mind.

Just as Shara teamed up with Han in the second half of the first issue, here she joins Leia on a diplomatic mission to Naboo. Strangely, the issue alludes to Leia having visited her ancestral homeworld quite recently, but never expounds upon this detail. Instead, more is made about the fact that this was Palpatine’s planet than her mother’s. Still, the scenes here work extremely well, seemingly at first merely illustrating the growing confidence in the Alliance from itself and from others for it to successfully transition from ragtag rebels to governance of the galactic hegemony. In actuality, Naboo’s place in the issue is really to deliver upon the ominous threat established in its opening pages, with the nature and purpose of Operation: Cinder becoming more evident in the final panels.

Despite the title of the series, the Empire is not yet shattered, and seeing Greg Rucka and Marco Checcetto’s vision for how it eventually will come to be shattered is genuinely one of (if not the) most exciting additions to the Star Wars universe this year, even in the shadow ofBattlefront and Episode VII.