The philosophical society to which I belong is finally tackling the topic of gender at an upcoming summer session. Given my background in ancient languages (specifically Latin, Greek, and Hebrew), my own preparation for the discussion has primarily focused on the historical grammatical developments of gender, specifically with respect to the generic word for human/humanity in various languages. As a constant across Attic and Koine Greek, Latin, and Old and Modern English, distinct words specifically denoting a male member of the species have existed, and yet the generic term for human has also served as a synonym for male as well, in addition to belonging to the masculine grammatical gender (with the exception of Modern English, which, save for pronouns, mostly lacks grammatical gender).

In ancient Greek, ἀνήρ referred specifically to males, but άνθρωπος, which has the meaning of human, was historically used also in reference exclusively to males, but never to specifically females.1 Likewise in Latin, though the word vir denoted a male, homo (meaning human) was in the masculine gender, and numerous Romance languages descended from Latin treat the derivations of homo as nouns meaning “male.”

Old English had cognates for both vir and homo in wer and guma, respectively (from which we get words such as werewolf and groom). Mann was the more generic term for human, though it too was in the masculine case and had the secondary meaning of male.  Though in Modern English the primary meaning of man is “male,” with human/humanity as the strictly generic term, it is a relatively recent development that the gender neutral/inclusive meaning has been actively excised. Certainly the ever progressive Gene Roddenberry hadn’t meant to exclude Uhura in the tagline “To boldly go where no man has gone before,” but even still the recent entries in the franchise have substituted the saying with “where no one has gone before” (emphasis added in both).

This has the effect of giving the word “man” a markedness which it lacked before. By no longer doubling as the generic term for humanity, the masculine gender is consequently emphasized in the modern usage of the word “man.”

Video game protagonist have followed a parallel path with respect to “man” moving from cipher to markedness. It is a running jest among game critics that the generic video game protagonist is a thirtysomething white bald guy with a beard. No matter how many additional adjective you add – straight, cis, American, physically fit – such still describes me perfectly. Add a cowboy hat to Cole Macgrath or any number of player characters in past years and you could hardly tell them and me apart. And yet, despite so many surface level similarities, I’d never felt any special kinship with those characters, at least not in the manner many critics might imagine in their calls for more diverse characters similar in appearance to themselves. Rather, it was specifically because traits such as maleness were the default that they became background noise, static. If I searched for specific similarities between a character and myself, such was usually a shared sensibility; in the most recent Mortal Kombat, for example, I projected onto Erron Black not because he and I look all that alike – aside from being white men, you’d never mistake us for brothers – but because we had the same taste in headwear. 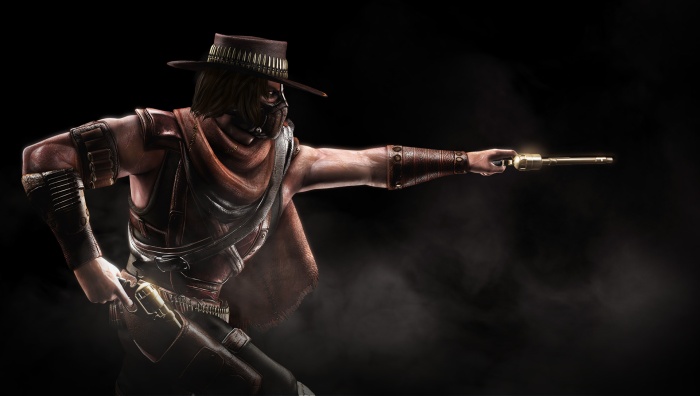 The increasing preponderance of female protagonists in games of late – think Alex from Oxenfree, Aloy from Horizon, Aurora from Child of Light, Max from Life is Strange, Red from Transistor, etc. – has lessened the assumption of male as the player-character default. Consequently, the inclusion of a male protagonist is a more active and intentional decision on the part of game designers. This has opened the doors for games starring men to be specifically about the masculine condition as opposed more broadly to the human condition.

It is for this reason that I regard the game which showed best at E3 this last week to be the newly announced installment of God of War. Despite my lifelong love of Greco-Roman mythology, such was a series I’d never found myself interested in previously. This disinterest was reinforced by trusted commentators who’d disparaged the prior entries as monotone, saying Kratos was so singular in his rage that there was no room for emotional beats or character development. This was not the Kratos seen at Sony’s press conference. By making him a father, by giving him the mission of not merely felling his foes but protecting his progeny, and moreover of preparing that son to survive in the world, instilling in that boy what it means to be a man, Kratos as a character promises to be full of complexity. No scene showed this better than when Kratos reached out to comfort the child after forcing his son to slay a stag, only to pull his hand back, withholding the hug. The rumors I’ve read state that the rest of the game will proceed along the same lines as the E3 demo, with both Kratos and his kid together and playable the entirety. If such indeed is the case, if everything revolves around the (sometimes broken) bond between father and son, such changes the theme of the series significantly, being less about rage and revenge and more so about masculinity in all of its complexity.

A surer example still is the impending Final Fantasy XV. The game’s director, Hajime Tabata, has gone on the record in defending his decision to include an all-male main cast in this entry of a series which had historically been diverse, stating that he wanted the game to specifically be about boys being boys, and acknowledged that the tenor of their interactions would have differed by including female party members. Though other games have happenstantially had all-male parties, the last time I can recall a game portraying its male characters as acting markedly different in the absence of their female friends was certain scenes in Persona 4 Golden, such as various school trips in which the guys and girls stayed in separate tents or hotel rooms. Just as Tabata hopes to capture in Final Fantasy, those parts of Persona absolutely had an honesty in their portrayal of male friendships that could only be captures sans Chie, Yukiko, and Rise.

Amanda Jean of Remeshed recently expressed some incredulity at the proposition that more games such as Final Fantasy XV should thematically tackle masculinity, and that the absence of female characters is occasionally called for in order to lend the depiction of male companionship a certain sincerity. But again, despite male characters being the historical default, maleness as a theme is just now a novelty; Final Fantasy VIII or X were no more about masculinity for having Squall and Tidus as their respective player-characters than Final Fantasy XIII was about femininity for having Lightning in the lead. But XV is, for all intents and purposes, a bachelor party. I’ve actively avoided spoilers for the game, but one tidbit I’ve learned is that the prompt for the Noctis and company’s cross-continental road trip is his impending nuptials to Lunafreya.

One of my best friends is getting married himself this December, and the task of planning his bachelor party has fallen to myself and our mutual roommate from undergrad. We’ll be partaking in a rooftop pub crawl across Manhattan, dining at Zagat’s top-rated steakhouse, and I’ll be smoking a cigar for the first time. It should prove to be a blast. It will be boys being boys. All three of us has numerous female friends, but not once did it ever occur to either of us planning all this to invite them to the festivities; there are often occasions for intermingling together guys and girls – even purely platonically – but this is not one of those times. Tabata is right by suggesting that the tenor of the event, of ourselves and our behavior, would be altered by their inclusion. The purpose of the party is not to exclude, nor does this one night’s reprieve from their company represent our regular relations with women or infer any lack of respect for females on our part. Rather, it’s a rare celebration of bachelorhood, uniquely masculine in that respect and thus appropriately all-male in its make-up. I see the whole of Final Fantasy XV’s story, or at least what’s been shown thus far of its road trip, as being much the same.

Until recently masculinity was so “ubiquitous” as to be itself invisible. Games such as the new God of War and Final Fantasy XV speak to me as a male in a way older games were unable to when their maleness meant nothing, signified nothing. It’s a trend I hope to see continue. We need more games about masculinity.

1 A prominent example of this is found in Matthew 19:5, when Jesus states, “Ἕνεκα τούτου καταλείψει ἄνθρωπος τὸν πατέρα καὶ τὴν μητέρα καὶ κολληθήσεται τῇ γυναικὶ αὐτοῦ, καὶ ἔσονται οἱ δύο εἰς σάρκα μίαν,” which the English Standard Version (used in many lectionaries for its accuracy) translates as “Therefore a man shall leave his father and his mother and hold fast to his wife, and the two shall become one flesh.” Such is notable because it is among the clearest examples of a case in which “human” was clearly not the intended meaning for ἄνθρωπος.

4 thoughts on “We need more games about masculinity”