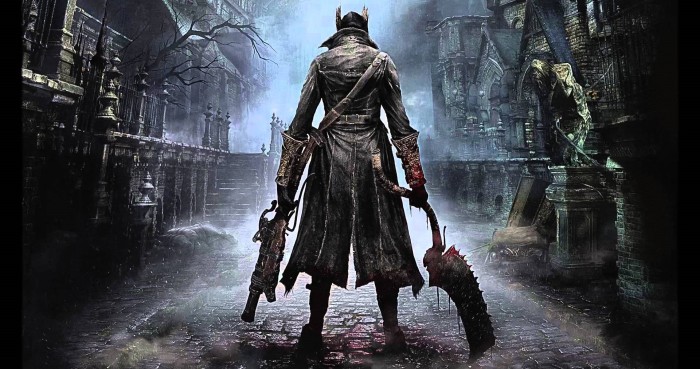 Bloodborne beat me. While other games have lost my interest, it’s one of the only games of the last decade which I’ve walked away from due to its difficulty being greater than the combination of my skill and patience (the only other I can think of is Hyper Light Drifter, though I still have every intention of going back to that one day). Not that this is a source of shame for me; as a games critic, I freely admit that I’m more skilled in writing about games than actually playing them. With the exception of Jedi Outcast’s lightsaber duels (which, had that been an esport, I’d have raked in millions), I’ve always been of median skill, regardless of the genre. I can usually beat my non-gamer friends in competitive fighting games or shooters, but online against actual opponents I average about a 1.00 kill-to-death ratio. Were video games only games, with no other purpose for existing than mastery of their systems and victory against other players (whether through direct competition or achieving a higher score, as in Pac-Man or Tetris), my mediocrity might have dissuaded me from ever taking up the hobby, let alone persistently playing throughout my life and passionately pursuing a professional career writing about such.

But video games are more than merely – or even primarily –  their gameplay. From out of the primordial soup that festered on the floors of early arcades, video games evolved. They’ve become amphibious – part-game, part-media, with the various species which sprang forth evidencing that duality in differing ratios. Some players – such as Kinda Funny’s Colin Moriarty – hold the mantra “gameplay is king,” generally preferring titles in which the aesthetics, audio, and narrative all serve as dressings for the ludic elements. Others, like myself, prefer games primarily as an artistic medium, similar to cinema or literature, albeit with a different set of artistic devices, such as player agency or environmental storytelling. In this view, gameplay does not exist as a measure of skill or even for enjoyment per se, but rather as another device with which to express the themes of the title. By this metric, a game succeeds when its aesthetic, narrative, and ludic elements all share the same theme and argue the same thesis.

This was the reason I first decided to play Bloodborne – one of the only games I’ve picked up well after its initially release – after reading Adam Smith’s article on Rock, Paper, Shotgun entitled Dark Souls’ Uncompromising Design Leaves No Space for an Easy Mode (Bloodborne is by the same developers as Dark Souls, FromSoftware, and shares much of its essential gameplay designs):

The difficulty isn’t an elitist exclusionary choice, even if some like to see it that way. It’s part of the design, thematically, mechanically and artistically. Repetition and death, and the learning experiences that come with them, are as much a part of Dark Souls as the ability to pause combat or chat to your companions is an essential part of a BioWare RPG.”

I detest games with an arbitrarily high difficulty, but if Smith was to be believed, the difficulty in FromSoftware’s titles was as indispensable to artistic message of their works as the particular euphonics of Tolkien’s constructed languages were to his Legendarium, or the Ptolemaic planetary structure was to Lewis’ Narniad. Perhaps the particular statement which Bloodborne and Dark Souls were utilizing difficulty and death to make would have been worth enduring the hours of frustration which would have awaited me had I persisted past the point at which I quit. I’ll never know now.

Still, as I walked away from the game for good, I applauded the medium as a whole for employing yet another artistic device unique to itself. Modern games are often accused – and rightfully so – over aping too much of the language of cinema. Yet just as games can foster a strong sense of identification between the player and the protagonist in a way which cinema is unable to achieve, so too are movies incapable of replicating difficulty. Games are uniquely active, while cinema, television, theater, fine art, and literature are primarily passive. One can at most pause the show, look away from a painting, or put down the book, but apart from the skill it takes to interpret what a work means, none of these require skill to experience; none could raise their difficulty level like a video game is able.

Or so I thought.

As my regular readers are aware, I’ve been immersed in Alan Moore’s Jerusalem for several months now, and recently came to the chapter entitled “Round the Bend.” It is told from the perspective of Lucia Joyce, the daughter of James Joyce and the alleged muse for her father’s magnum opus Finnegan’s Wake (that work being a major influence on Moore’s Jerusalem, the prelude chapter of which is entitled “Work in Progress,” the same name given to Joyce’s manuscript prior to publication). The chapter takes place in primarily on the grounds of St. Andrew’s Hospital, to which she was committed following her diagnosis of schizophrenia.

As Finnegan’s Wake’s unique idioglossia is supposed to have been constructed to semblance the somnolent or sleeping mind, so too does “Round the Bend” employ a linguistic style likewise replete with puns, portmantuas, foreign words, and neologisms – rarely written according to the rules of grammar, though discernable in their primary meaning when read phonetically instead of literally – for the purpose of portraying an insane mind (or at least one which appears to be insane, perceiving more of reality, not less).

Reddit user MrCompletely posited a compelling theory as to Moore’s purpose for writing this chapter:

So certainly part of the point is to try to get the reader into that kind of state of mind. I definitely can see that. I don’t know how familiar you are with Moore’s work in general, but he sees his art as a form of ritual magic(k), in the sense that it should ideally change the reader’s view of reality – most fully expounded in Promethea, maybe. I think that’s key to understanding what he’s up to. He’s overtly trying to pull an Alma Warren with this book, I’m sure of that much, and I think this chapter is a key part of it. I think it’s supposed to essentially be an almost drug-like or esoteric/psychedelic experience, to expand the reader’s consciousness into the kind of multi-dimensional view he spends so much of the book setting up. To take you from an intellectual understanding of that view to a first-person actual experience of it.”

I find this interpretation to be exactly right, particularly the notion of literature as effecting ritual magick, which, as MrCompletely rightly notes, is one of the key themes of Promethea. I also agree with his use of the word “multidimensional”; each word in “Round the Bend” adds a new dimension of meaning to language in much the same way as the time dimension adds “whenth” to space. The confluence of Moore’s style, themes, and allusions here is most definitely deliberate.

But to truly understand the difficulty of this seminal chapter in what will prove the crowning achievement of English literature, an excerpt to serve as example is necessary:

A phonetic translation, itself fairly difficult to derive, yields the following:

Strange elliptic eyes peer from the dull metallic trunks of the silver birches, and Lucia wonders, not for the first time, what madness truly is. In her own opinion, although she had never concentrated and has thus not really learned the trick of mathematics, at its root insanity might be a question of geometry. Her father in his time maintains that we are in a universe composed of four dimensions, only three of which are naturally visible. Might not our consciousness itself, ineffable to scientific scrutiny, be a phenomenon of four dimensions that has found itself constrained within a mortal body, and would doubtless appear to have but three.”

Space does not permit a full exegesis of even this short paragraph out of the full fifty-page chapter. But from a cursory glance, a few points jump out. From the first line, “stringe” and “peerl” connect the ideas of strange and peer to a string of pearls. “Mentallic,” “nut,” “luniverse,” and dementions,” by way of mental patient, nutty, loony, and dementia, all make reference to Lucia’s diagnosed insanity, whereas “unsamity,” which phonetically translates as insanity, is written so as to suggest such is not a cognitive impairment but rather merely not the same way of viewing the world.

The second sentence incorporates several allusions to mathematic – such as cosine, addition, net, gross, trigonometry, square roots, multiplication, and quantity – while the word which translates as mathematics is itself a portmantua of matter and magic, the combination of such being suggestive of Lucia’s thesis regarding consciousness. The same goes for the final word of the sentence, deomattry, combining “deo” meaning “God” with “geometry.”

The first word of the third sentence phonetically talks about her father, and the last word reflects it through the inclusion of the root “vir,” being Latin for “Man” (from which we get “virile” and the “were” in “werewolf”). The second phonetically incorporates “time,” while at the same time visually bearing similarities to “Einstein,” whose Theory of Relativity was the inspiration for Minkowski’s interpretation of spacetime as a four-dimensional manifold, the subject of Lucia’s musings here. The final sentence uses homophones such as “beau” and “fairnuminon” to suggest that this notion of higher geometry as being the genesis of consciousness is itself a fair and beautiful concept, despite that the mortal body is doomed to a “bloody end.”

Given how much meaning is incorporated into each and every word, even down to the individual syllables at times, and how a literal reading is impossible, given that such makes no sense grammatically, readers must learn a new set of skills to progress through “Round the Bend,” just as a player might have to master a new skill in a Souls game to progress through a level. It is, to borrow an expression from gaming, a “difficulty spike.” But, just as apologists for FromSoftware’s games attribute narrative and thematic significance to the difficulty, such significance is obvious in Moore’s Jerusalem. As the above paragraph evidences, it is very much about higher-level geometry, not unlike Flatland (which it also heavily references, including utilizing such as a chapter title).

Through the structure of the syntax, Moore teaches use to read multidimensionally. The first dimension is phonetic, and it can be seen in my translation of Moore’s text. But that is only one side of the text, and if it is the only part we observe, we see but one side of a cube and mistake it for a flat square. Moore forces us to change our perspective, to see an additional dimension to the text replete with many meanings more, including allusions to Joyce’s literature, Lucia’s life, quantum physics, philosophy, and theology.

While Bloodborne may have beat me, I’m adamant that “Round the Bend” will not, even as I grind through it at a glacial pace. It’s one of the only instances where I truly feel motivated to “git gud,” the previous 883 pages of Jerusalem having thoroughly persuaded me as to the novel’s literary genius. Unlike Bloodborne, I know exactly how much effort “Round the Bend” will require, but likewise I know the payoff will be well worth the pain.

2 thoughts on “Bloodborne and “Round the Bend”: On Difficulty Levels in Games and Literature”