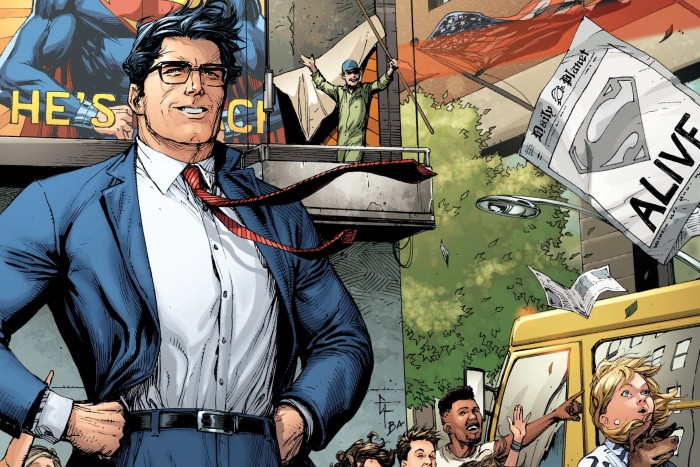 Perhaps it’s partially due to having played through Mankind Divided recently, but the latest issue of Action Comics definitely had the feel of a Deus Ex game, replete with its protagonist crawling through conspicuously large air ducts. A surely sinister cutting edge technology corporation is at the center of a vast conspiracy, one which has stronger ties to our hero than even he himself initially suspects. Of course, the “conspiracy” here is far less convoluted than that in Human Revolution or Mankind Divided, and can probably be unraveled given the evidence in this initial issue of the story arc alone.

The strongest piece of evidence to consider is actually metafictional; specifically, the content of Clark Kent’s narration boxes. It’s clear from such soliloquies to the audience that he himself genuinely believes the account he related at the press conference; that prior to his re-emergence during the Doomsday attack, he’d been in hiding from Geneticron for many months, with Superman posing as the mild-mannered reporter for the latter’s protection. Clark’s performance on the polygraph test administered by Batman only serve to convey such certainty to the characters in-universe as well. That Clark is not merely lying – as he had so many times to Lois in classic Silver Age stories – leaves only two possibilities. The first is that that the events he remembers actually occurred. The second is that false memories were implanted in him.

The former is not completely outside the realm of possibility, despite readers having access to issues which directly contradict Clark’s claims. We know Clark Kent really was Superman’s secret identity, precluding the possibility that the Last Son of Krypton and the farmboy from Smallville were once separate individuals… on Earth-Prime. On other Earths within the DC multiverse, the were indeed separate characters, such as Earth-45 (as seen in the one of the greatest Superman stories ever told, Action Comics #9). And given the fact that this new Clark appeared during DC’s latest upheaval of their multiverse in the pages of Rebirth, the possibility exists that this Clark originated on an Earth in which Superman really did pose as him, exactly as he maintains, only arriving on Earth-Prime recently and without realizing his displacement. 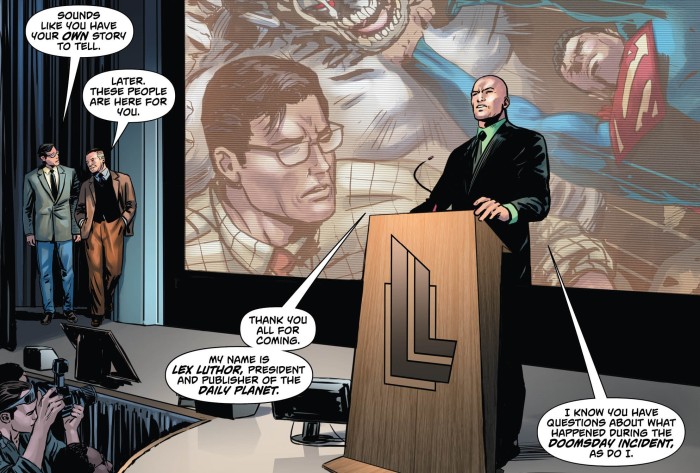 While nothing known so far precludes the above scenario, the preponderance of evidence points instead to Clark’s memories being falsely implanted in his mind, probably from his creation, which I’d place sometime between the death of the New 52 Superman and this Clark’s first sighting just outside of Geneticron. The fact that his earliest corroborated appearance was right outside of a highly secretive biotech corporation points to the possibility that Clark was created at the very facility he was first found nearby. This of course raises the question as to why Geneticron would implant those specific memories. Instead of erasing from his head any notion of Geneticron’s existence, his programmer (if this theory is indeed true) doctored decidedly negative memories in Clark’s mind, prompting him to “resume” his investigation and thereby return to Geneticron headquarters. I maintain that the events that transpired there, as seen in his issue, were pre-planned, from the security guard purposefully missing the far-from-bullet-proof Clark to the CEO casting him off the top of the skyscraper just as Superman was in position to publicly save Kent. To what end all this transpired is anyone’s guess, but I’m confident all will be made clear in the coming issues.

Another thread that’s yet to be untangled is the identity of the mysterious man with the blonde beard and the red hat. Though I’d not noticed initially, in re-reading Action #963 I’d noticed that he’s in nearly every crowded scene throughout the comic, including the press conference, at the train platform, and among the bystanders which witness Superman save Clark. I’m at a loss as to who this character could even possibly be. His gait certainly doesn’t suggest a super-human physique, ruling out the likes of Arthur or Oliver. Pete Ross perhaps? More likely a new character altogether (unless he’d been in the background of previous issues of Action Comics as well).

After the dreadfully dull fight against Doomsday which went on for four issues too many, Action Comics is at long last finally addressing one of the more interesting plot points introduced in Rebirth, namely the co-existence of Clark and Kal as man and Superman, respectively (though this issue is the first not to feature the best superman in recent months, power-armored Lex Luthor). Moreover, the focus on Clark is a welcome reprieve from the nauseatingly saccharine domestically of the post-Crisis Superman’s family life, despite (as so many Lois Lane stories over the years) the story’s sin of sensationalizing the life of an investigative journalist to such an extent that it shatters the reader’s immersion into a world of alien demigods.

Compared to its middling mediocrity since the start of Rebirth, Action Comics #963 is a bit better, but barely. Still, if this is as good as Superman stories will remain for the rest of the postmodern age of comics, readers would have been better off had the Man of Steel’s never-ending battle actually ended after American Alien wrapped up.