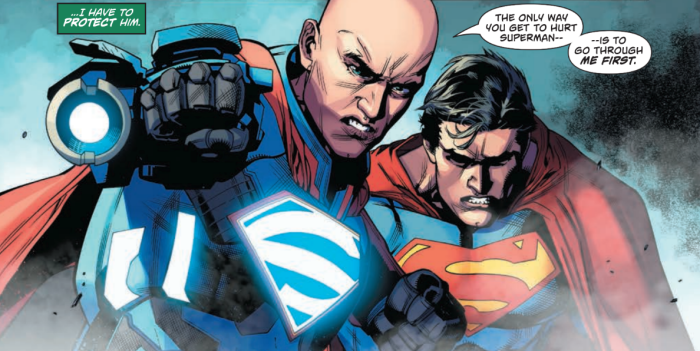 Any piece of fiction worth the paper it’s printed on requires the author to navigate carefully between the Scylla of naturalism and the Charybdis of contrivance. To the port side is a work of fiction marred by all the pockmarks or reality – the meandering manner of dialogue, the meaninglessness of chances and coincidences, the existentialist absurdity behind every event; at its worse, such fiction resembles the unscripted and unedited footage of some reality television show. To the starboard is a work of fiction whose characters act without any respect to their established personalities and present motivations, whose events occur in spite of logical consistency or even rules of reality; rather whose characters act and events occur as they do solely to advance the plot which the author has railroaded them into, to hit the dramatic beats of his chapter-end cliffhangers or third-act climax. At it’s worse, such fiction resembles Action Comics #971.

It’s a clear example of the artificially imposed format of twenty-two pages per issue and the bi-weekly release schedule negatively affecting the actual content of the work. Jurgens has demonstrated throughout his run on Action a strong penchant for dramatic cliffhangers to end each issue on, on such has served him reasonably well until now. His inaugural issue, #957, ended that issue’s fight between Lex and Superman with the dramatic entrance of Doomsday into the fray. The last page of #964 gave readers their first glimpse of Earth-as-Apokolips, pocked by hellpits and branded with an “S” insignia the size of a hemisphere. The following issue ended on the first meeting Lois Lane and Lana Lang, albeit a Lois from a previous iteration of the multiverse posing as her secretly deceased counterpart and a Lana Lang who was secretly Superwoman and had witnessed Lois death. This last example in particular is a truly perfect cliffhanger, one which contains an entire issue’s worth of implications all in a single image. Such truly whets the reader’s appetite for the next issue of Action.

But as often as Jurgens delivers a decent cliffhanger, he just as often delivers a dud, one which imposes a moment of melodrama into the narrative solely for the sake of the cliffhanger, interrupting and disrupting the story he might have otherwise told in a less restrictive format. Last issue, #970, is a perfect example of this, with Superman suddenly turning heel on Luther during the latter’s trial, proclaiming Luthor guilty on the basis of evidence which Superman had spent the entirety of the issue deeming inadmissible. Coming out of nowhere as it did, it lacked all credulity, and I observed in my review of that issue that the only possible explanations for such were an obvious and telegraphed ploy on Superman’s part, or that Jurgens understood the character even less than I credited him for. While I’m heartened to find that this issue confirms the former and not the latter, the result is that pages and pages are wasted explaining away the break in character so that it makes a modicum of sense. Such happens so often with his cliffhangers that half of Jurgens’ run on Action has been spent paving over plot holes.

Indeed, the bulk of this issue could be seen as Jurgens’ attempt to address his mischaracterization of Superman, not merely in the previous issue, but throughout the last fifteen. On the one hand, Jurgens acknowledges Superman to be paragon of a very specific moral code, extending beyond the vague valuation of life most heroes adhere to and instead including such classic American Ways as the right to a fair trial, the right to privacy, and a presumption of innocence until proven guilty. Jurgens demonstrated Superman’s commitment to the first last issue (in part), but Luthor here rightly call out Superman on his illiberal actions against, violating Lex’s rights and treating him adversarial without any just cause or evidence whatsoever. I’d previously pointed out the events of Forever Evil #1 as one of the few examples of this universe’s Lex genuinely behaving as villainously as the Luthor of the previous New Earth with whom this post-Crisis Superman is most familiar. Jurgens here responds to such, making that exact scene the moment of contrition which put Luthor on his path to repentance and redemption. In the same breath, Luthor turns the tables on Jurgens’ quite hypocritical Man of Steel:

Maybe it’s time you practice what you preach and stop condemning an innocent man.”

Jurgens has dug himself a deep hole with Action Comics, shoveling out contrivances and mischaracterizations, born, it would seem, out of his infatuation with cliffhangers in particular and mysteries in general. This issue’s cliffhanger seems to focuses on the series’ central enigma: the mystery man named Clark Kent, and his first encounter with the son of Superman. For all the problems with the current issue enumerated above, the fact that that particular subplot involving Kent has been far less guilty of leaps in logic and misconstruing classic characters – mostly because the entire premise is of a deliberately alternate take on a seemingly familiar character, which certainly seems to play to Jurgens’ strengths (and weaknesses) as a writer – brings with it the promise that next issue might actually sail with some success through the Strait of Messina.