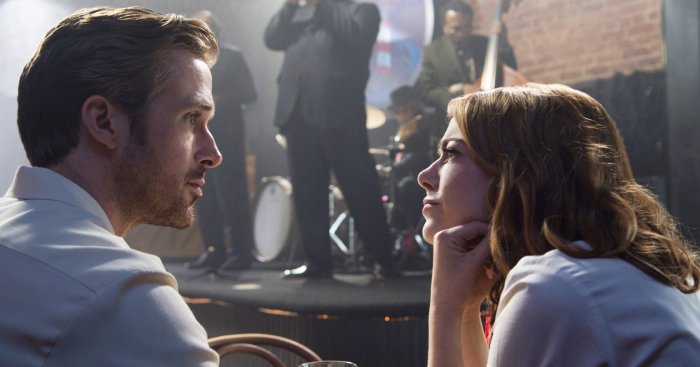 Sebastian’s question to Mia here in the key scene to writer/director Damien Chazelle’s La La Land is not so much an inquiry as an accusation; it’s not so much directed at Mia as the audience; and it’s not so much about jazz per se* as it is about the Golden Age films which La La Land seeks to recapture. Indignant at the ignorance of someone who’s never listened jazz – who’s heard it, but never truly listened – blanketly dismissing the sole source of his passion, Sebastian promptly proceeds to drag Mia to a smoky jazz club.  They sit right up front and allow themselves to be engrossed by the experience before them, and as they do Sebastian rhapsodizes to Mia about the aural artistry before her eyes, explaining that jazz is a music that must be seen to be heard, that each performance is truly unique, a product of the passions particular to that player at that moment, and that it’s dying. Jazz is dying. Because so much of society has lost its ability to appreciate the subtly and skill behind such, that entire artistic genre would be lost to future generations. And that’s why he wants to own his own club, as a place to preserve the art, and – just possibly – to enflame peoples taste for traditional jazz once again.

Chazelle’s commentary hear is clear. Even in the midst of the current renaissance of independent filmmaking, box offices are nevertheless dominated by low art/big budget blockbusters, so saturating theaters that true cinema is a dying art form. The modern movie-going public has lost the intellectual and imaginative tools to appreciate the artistry of cinema, but if they’d only experience it alongside someone knowledgeable and passionate, someone who could show the skill involved and explain the virtues of the form, then perhaps those audiences would begin to share in that passion and classic cinema would be preserved for another generation more.

Chazelle has taken it upon himself to be that expert and that advocate, with La La Land simultaneously his demonstration and explanation of classic cinema, serving as the Sebastian to our Mia, the theater in which La La Land plays his dim-lit nightclub, the movie his music. As such, La La Land is full of metatextual commentary about Hollywood and the film industry. But per the old adage “show, don’t tell” it is not merely meta, but the apotheosis of the studio system style. The film’s cinematography features a bold color palette with saturated hues, it’s lighting contrasts so sharply as to be nearly be nearly chiaroscuro in certain scenes. And its long, lingering shots put on full display the multi-talents of its main cast, from Gosling’s skills as a pianist to Stone’s pathos as a serious actress to the incredible dance and vocal talents of both. When Mia asks of her one woman show whether it’s too nostalgic, it’s apparent that even as he was writing such in the script Chazelle was wondering so about La La Land itself, given how much of its style is indebted to the films of Hollywood’s Golden Age. Sebastian assures her that the nostalgia is perfect, that that’s precisely what her play is all about, and while watching such the viewer is inclined to make the same pronouncement about the film itself.

It should come as no surprise then that the central conflict come from the pressures placed upon Sebastian and Mia to put aside the pursuit of their passions and their artistic integrity in order to achieve stability and security, to “stop dreaming and grow up.” At one point Sebastian is offered an opportunity which would confer upon him the fame and fortune which serves as the measure of success for most anyone else. But doing so means being member to a band whose sound is subject to the tastes of rather philistine fans, who even as they bop along to the beat at his concerts are not actively listening to the music being played, being more enamored by the spectacle on stage of flashy lights and scantily-clad dancers than the skill Sebastian evidences in his performances.

In inviting him to first join this band, the lead asked Sebastian, “How are you going to be a revolutionary if you’re such a traditionalist?” The answer Chazelle ultimately arrived at for himself seems to be that to be truly revolutionary today is to be a traditionalist. Undoubtedly, Chazelle could have had a more lucrative career directing special effect laden films for some studio’s cinematic universe under the iron fist of a Kathleen Kennedy or Kevin Feige. But if he had not been the one to direct the likes of Whiplash or La La Land, would there be anyone to produce and preserve the kind of classic cinema for which he’s so evidently passionate. After all, work on La La Land was begun before and well under way by the time the Cohen brother’s “Hail, Caesar!” released, which was similarly a movie about movies set in Hollywood and emulating the style of Golden Age films as an ars cinematica on the importance of films as an art form. Indeed, that the two films were not only so similar with respect to their message and approach but arrived within mere months of one another should serve as indication of the urgent need to recue Hollywood from the philistine populism and pure pursuit of profits which will soon enthrall the medium as a whole to the twin threats of American man-children and Chinese propagandists.

Purely on its own merits, La La Land certainly succeeds. It needed to accomplish nothing short of showcasing so smart a screenplay, such subtle thespianism, such sharp cinematography, that the sheer skill displayed in all of these was itself a persuasive argument for the importance of writing and acting and directing to the craft of cinema, and to engender in its audiences a desire to see these done better in the films they watch henceforth. While the weeks after release are too short a span to judge its impact on the industry and the types of films it will produce going forth or the general public and the types of movies they’ll watch here on out, one would hope that La La Land, along with Whiplash and Chazelle’s filmography in the future will usher in a new age of high cinema in the same way as Jaws and Star Wars once ushered in the age of the blockbuster.

But regardless of its wider influence, upon which we can only speculate, at the individual level its impact is already felt. La La Land, along with Whiplash and “Hail, Caesar!” belong to a body of recent works which have increasingly imparted in me personally both a desire to see more films on the artistic level of classic cinema as well as a demand for the type of films I’ve long enjoyed – the summer tentpole popcorn flicks and their like – to be held to a higher standard, to evidence the same excellence of storytelling at every stage, from screenplay to post-production, as La La Land proves possible. I originally had no intention of reviewing La La Land, seeing it weeks after release merely for personal enjoyment, but, as Sebastian did for Mia, Chazelle shared his passion with me and succeeded in making that passion my own. I only thought it right to do the same for you. Go see La La Land, not merely because it’s the best film of 2016, but because it’s a truly transformational experience, a movie not merely enjoyable to watch, but which will change the very way you watch movies.

*though, like Whiplash before it, La La Land certainly testifies to Chazelle’s love for that particular musical genre.