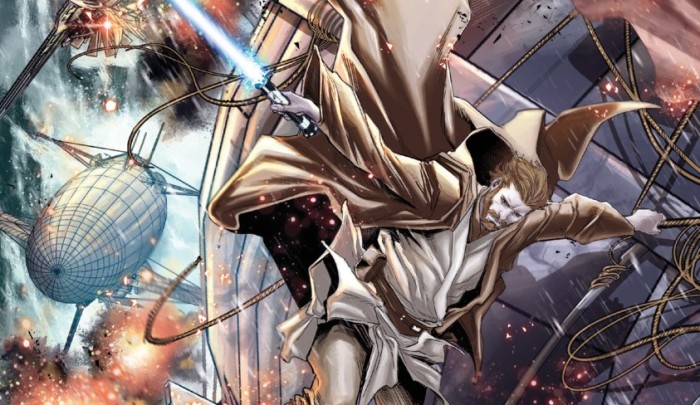 The arbitrary binary is a common trope in science-fiction. Two peoples have hated one another for so long that they have forgotten what caused their discord in the first place. All that remains are arbitrary distinctions, usually directly inverse of one another. In the infamous Star Trek episode “Let this be Your Last Battlefield” the divide was between two races of humanoid aliens, one white on the right side and black on the left, the other black on the right side and white on the left. Here in the second issue of Obi-Wan and Anakin, Charles Soule drives home the concept in a number of ways. The two warring factions are labeled the Open and the Closed. The Open bear red markings and wear red garb, while the tattoos and clothes of the Closed are blue. Generations past, the Open were oppressors, the Closed subjugated. The one thing they share in common is their homicidal hatred for one another.

Throughout most of the issue, it is difficult not to conjure real world comparisons, to wonder which real world rivalries most inspired the metaphor. The Israeli-Palestinian conflict come to mind most readily, but there are analogues as well in the Tutsi and Hutu of Rwanda and even in the Reconstruction era segregation and subsequent racial tension between Whites and Blacks in America. Soule’s script so systematically hits all of the trope-markers that most of the issue reeks of cliché initially. Yet such proves necessary set-up for an ingenious subversion.

Anakin draws precisely the wrong lesson here from witnessing firsthand the deep divide between the Open and the Closed. On the final page he shares what seems the Aesop with Obi-Wan: “They’re just like us… The Jedi and the Sith.” It is true that the Jedi and Sith are two historically bellicose factions, but their divide is in no way arbitrary. It is not based on accidents of birth, such as race or ethnicity; it is a divide of principles, of right and wrong, good and evil. Anakin’s confusion of Moral Realism for Cultural Relativism here is meant to anticipate his eventual embrace of the Dark Side. By denying goodness a privileged place, Anakin takes his first steps on a path where he begins to regard the light and the darkness, the Jedi and the Sith, as equally valid, soon after wholeheartedly siding with the Sith over and against the Jedi. His saying on Carnelion IV that the Jedi and Sith are alike would be distortedly echoed on Mustafar: “In my opinion, the Jedi are evil.”

Per the debut issue, there is another flashback to Anakin’s tutelage under his two masters, Obi-Wan and Palpatine. Through the juxtaposition of the scenes, it is clear that Palpatine’s grooming of Anakin is directly influencing the latter’s confused conflation of the conflict between the Closed versus the Open and that of the Jedi versus the Sith. But the symbolism of the scene with Sideous is sublime in its own right.

“Why are we here, chancellor? I’ve always heard it isn’t safe this far down.”

“Ah… you have heard. But have you ever been this far down, Anakin?”

On a literal level, the two have travelled to Sub-Surface Level 2685 of the Coruscant underworld. Like any appropriate Hel or Hades, this underworld is a land of darkness, a land without sun. Symbolically, Palpatine habituating Anakin to question his Jedi teachings, exhorting Anakin to experience that which is prohibited, results in Anakin following the Sith Lord to a place of spiritual danger and darkness.

After his experimental panel layouts in Journey to The Force Awakens: Shattered Empire, it’s disappointing to see Checchetto return to a more conventional grid. However, the images in those panels are as exhilarating as ever. Better than before even is the framing, especially a scene early on in which Obi-Wan walks calmly as an airship explodes behind him in typical action movie fare, and another soon after it, Kenobi standing overhead, arm outstretched, face cloaked like a classical wizard, commandingly bellowing: “That. Is. Enough.”

The first issue ended with the question “What in the green hells is a Jedi?” The agenda for this series was thus for Obi-Wan, Palpatine, and Soule himself to answer that question. Issue two takes a fascinating approach to such, not just by juxtaposing the Jedi to the Sith, by demonstrating the false comparison between the Jedi/Sith dichotomy and the arbitrary divisions of bigotry. This issue’s answer to what is a Jedi? Those who chose the right side, the side of good.