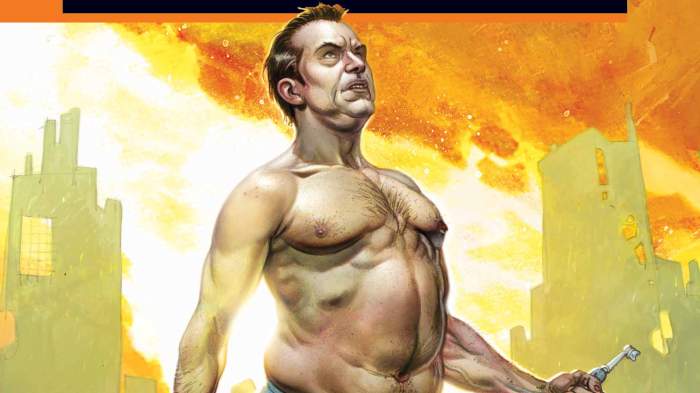 “When I was a kid, all I ever wanted was to be a superhero… Then you grow up and realize that none of it’s real. No one’s really that strong – or selfless.  Hell, in the real world?  Superman falls of a horse and ends up in a wheelchair.  Nope.  Being a superhero – a real one—is impossible.  But then again – maybe all you need’s the right drugs.”

These words – juxtaposed against images of a fiery, bloody, utterly horrific car crash, gazed upon by a middle-aged man unscathed – serve to open the story in Jacked #1.  By the first sentence I’d already begun to suspect it, and by the final line it was all but confirmed: Jacked would be for me the exact type of story every reader hopes to happen across; it’s an autobiography ghost written by an author who just happens to never have heard of me.

Eric Kripke is, of course, writing a wholly original character, one surely based more in his experiences than my own, but the broad strokes are so similar that the sense of semblance seems warranted.  In 2nd grade, when the class shared with one another what profession we planned to attain in adulthood, I answered “Superman.” Twenty years later, that remained more or less the case.

The problem was, at twenty-seven years of age, I resembled Jacked protagonist Josh Jaffe much more than Clark Kent, sans the former’s wife and kid.  I’d suffered an early onset of androgen alopecia and sported love-handles, despite the closest thing to a love life being the pornography I’d peruse.  Like Josh Jaffe, I said I was fine, but I wasn’t, so I did exactly the same thing as he did: pills, and lots of them.

A few of the supplements I took were nootropics, either as a primary effect or an added benefit, but I was also popping fat-burners, thermogenics, creatine, and testosterone boosters.  And they worked.  Within three months I’d shed forty pounds of fat and packed on ten pounds of solid muscle.  I was working out three hours a day, five to six days a week, with energy to spare.  I had a six pack so impressive that it once caused a couple to break up, and on another occasion caused several strippers with other clients to quit halfway through their lap dances to come stare in awe of it.  I was, per the title of the series, jacked.

What happened then?  My life became, predictably, a comic book, replete with serialized adventures, a soap opera-esq will-they-won’t-they love triangle, and a costumed-persona with matching moniker of minor local celebrity, all culminating in a bitter battle with a best friend turned archenemy.  The world was saved, or at least my own little corner of it.  It was all very exciting.

So when I say that Jacked’s premise of a down-and-out everyman suddenly gaining superpowers by taking over the counter nootropics is relatable, I don’t mean to suggest that such is a common experience shared by the whole of humanity that any given reader will relate to, but rather that this initial issue so closely mirrors my own unique circumstances that the similitude alone would prove deeply affecting.

The fact that Kripke tells the story so skillfully is no small bonus, however.  I’ve never seen Supernatural, the CW show of which he is the creator, but the fact that a first time comic writer in his debut issue hit Vertigo’s high standard of excellence, which many industry professionals go their entire careers without achieving, is truly astounding.

Just as television veteran Kripke is making the move here to comics, his co-creator on Jacked, artist John Higgins, will soon see his acclaimed Preacher series adapted to the small screen.  Thankfully, though, he’s not abandoned comics for cable, lest we’d never have his sublime art in this series.  His pencils are highly detailed, but it’s his colors which impress most; I’ve not seen an acid trip rendered so vividly since Grant Morrison’s The Invisibles.  But even in the lucid moments he finds occasion to pepper the pages with bright, psychedelic colors, often with objects which anticipate such hallucinatory sequences, such as the drugs’ labelling.

Jacked #1 is an immediately identifiable concept executed on perfectly.  Here in America it’s Thanksgiving as I write this review, and I can think of few things to be more thankful for than the overflowing cornucopia of consummate creator-owned comics we’ve been bountifully blessed with this year, of which Jacked already stands among the best.