These are the most well known words ever spoken by Captain America, and they are emblematic of everything which compromises the very core of the character. Even though they appear in a word balloon printed on a page, the reader can practically hear the moral authority and certitude of the man speaking them; a mere man, but with such conviction that gods and kings alike follow his lead.

Spoken during the events of Civil War, they appear in the recent film of the same name, albeit not by Captain America, but by Sharon Carter to him. Robbing Rogers of such a speech serves to likewise rob him in part of his moral authority. Having had occasion and opportunity just a scene earlier to take a strong stand before Secretary of State Ross and his fellow Avengers, he remained uncharacteristically soft spoken, somewhat silent even. Steve Rogers should need no reminder to stand up for what is right; such not only has defined the character in the comics, but in ever previous film in the franchise prior to this latest entry. Captain America: Civil War is a series of spectacularly choreographed fight scenes with all of the signature four-color fun which fans have come to expect from Marvel movies, but at the same time gets the characters wrong in several subtle but important ways.

The most egregious mischaracterization is Rogers’ and Stark’s causa belli. Any great story pitting the Star Spangled and Golden Avengers against one another is necessarily an exploration of the conflicting claims between an ethical framework based upon duty to moral absolutes and one based upon consequences and moral calculations. This is the sharp dichotomy in Mark Millar’s Civil War and Jonathan Hickman’s Avengers run, and while the film flirts with such rationales, the rhetoric is muddled by a mix of messages by both characters. Stark, a far cry from the Galt-esq Randian Objectivist he’d been in the second Iron Man movie, appeals to the Avengers’ need for accountability more than the possible positive outcomes the Accords could afford (e.g. engendering public trust, decreasing civilian casualties and collateral damage, etc).

Rogers, meanwhile, is the more consequentialist in his reasoning, imagining scenarios in which petty politicians prohibit the Avengers from intervening where necessary, or forcing them to fight when they otherwise wouldn’t. Given Hydra’s historical infiltration of S.H.I.E.L.D, the World Council, and even the U.S. Government, Rogers is right to have a deep distrust for similar institutions, but that particular objection misses the heart of the issue. The seizure of the Avengers’ assets and and the conscription of its members as outlined in the Sokovia Accords is not wrong because of what might result, but rather wrong in and of itself because it restricts freedom and criminalizes heroism. Right and wrong are neither democratically defined by legislation nor bound by borders, but such are the lies Captain America would be implicitly accepting were he to have signed on.

This clear clash of ideologies between deontology and utilitarianism, between liberty and authoritarianism, between morality and legality, between right and wrong, could have made a perfectly compelling impetus for the film’s central conflict. But instead of the war being truly ideological it is instead made merely personal. Captain America never faces off against Iron Man’s forces simply because they are in the wrong, but always for a primarily personal reason, whether saving Bucky’s life, trusting Bucky’s intel, or suffering Stark’s vengeance for the secret Steve harbored. This does not raise the stakes but lowers them, reducing universal matters of moral and political philosophy to mere soap opera. 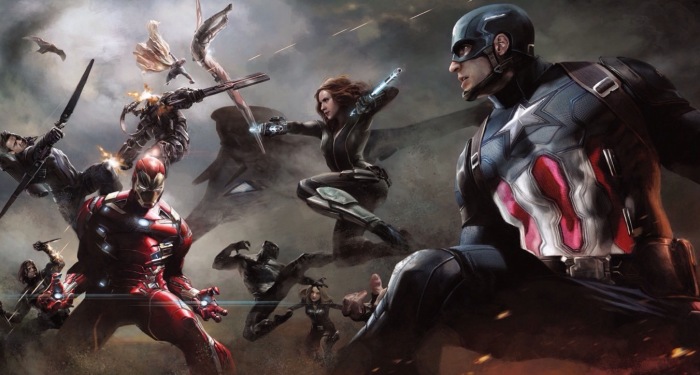 Also lowering the stakes is the expanded global scope of the Sokovia Accords as opposed to the purely domestic Superhuman Registration Act from the comics. The latter created an interesting juxtaposition between Captain America and the country of America, revealing the former’s moniker to be a misnomer of sorts. While he demonstrated a willingness to question his military superiors in S.H.I.E.L.D. in The Winter Soldier, the Superhuman Registration Act was written as the result of popular groundswell and passed with overwhelming support. It pit Captain America not merely against the government of the United States but against the American people and principles of democracy. Not since his stint as Nomad following the Watergate scandal had the question been so powerfully raised “What does the name ‘Captain America’ truly mean?”

Shadi Hamid of The Atlantic wrote this very morning an excellent examination of the intrinsic tension between democracy and liberalism. In it he states, “In the American experience, democracy and liberalism seemed to go hand in hand, to such an extent that democracy really just became shorthand for ‘liberal democracy’ …Liberalism is about non-negotiable personal rights and freedoms. Democracy, while requiring some basic protection of rights to allow for meaningful competition, is more about popular sovereignty, popular will, and accountability and responsiveness to the voting public.”

Though Hamid was speaking to the reactionary populism that has resulted in a rising demagoguery in American politics, the contrast between the core principles of democracy and liberalism is exactly the debate Stark and Rogers are try to settle when pounding one another with repulser beams and vibranium shields, respectively. Moreover, it reveals a historical and philosophical astuteness in Rogers’ patriotism which is sadly lacking in the deeply divided climate of the country currently from the grassroots campaigners to the candidates themselves. Steve Rogers is Captain of the America founded not on democracy, elections, and representation, but rather the America founded on classical liberalism; his allegiance is not to the flag, nor the republic for which it stands, but to the values it represents: autonomy, liberty, and the rights of individuals. Given the timeliness of the topic, it is a truly a missed opportunity not to have had the Accords as an American challenge to the Captain.

Speaking of the Sokovia Accords, they represent a significant tonal departure from the prior entries in the Marvel Cinematic Universe, including the events which Ross specifically references in presenting the legislation. Other than the Wakandans who Wanda accidentally kills at the film’s open, I’d be hard pressed to name a single scene in any other Marvel movie where a hero’s intervention even incidentally results in a civilian casualty. Contra Ross, the Avengers ability to rescue imperiled bystanders was shown to be a spotless record, saving everyone ever shown on screen. These retcons seem less so organic to the metaplot of the movies and more a pretense to put forth the particular plot point of the Accords.

None of which is to say that Captain America: Civil War is in any way a bad film. Even bottom of the barrel Marvel movies – think Incredible Hulk, Thor: The Dark World, Iron Man 3, Ant-Man – are worth the price of admission at least once, if only to stay current with the world Marvel is building, and Civil War is a far finer film than any of those. Admittedly, the ensemble cast feels a bit bloated at times, even compared to the two proper Avengers movies. And the Russo brothers were able to do more with less in their previous outing with Winter Soldier – still the best Marvel movie by a mile.

But even with the rather glaring problems addressed above, the little moments add up to more than balance out the bad. I didn’t realize how much I’d wanted to see the cinematic version of Redwing till the first scene of him in action, after which I was sold immediately. Steve single-handedly holding the helicopter to the landing pad had me cheering in my seat with the rest of the hoi polloi – a truly rare occasion. I want to get a frame of the scene turned into a poster and hung up at my gym. “One of these days” I’ll think to myself as I stare at it while curling free weights. Perhaps best of all, elderly old Aunt May is even hotter than femme fatale Black Widow – the sign of a truly great casting director that’s more than earned his paycheck (plus, I hear Marisa Tomei likes bald guys)!

More so than with any other Marvel movie, Captain America: Civil War is the one I’d most encourage theatergoers who enjoy the film to additionally check out the comics. Such are almost always more cerebral, with writers who have a more concrete understanding of the characters, not to mention an operatic nature to their story-telling unrestrained by budgets or runtimes. Mark Millar’s Civil War is the obvious recommendation, but I’d particularly point people to the equally bellicose brotherhood between Rogers and Stark in Hickman’s Avengers/New Avengers run. At eighty five issues, including the Infinity event, it’s a significantly greater investment of time and money beyond the three hours and $17 price of admission to the cinema, but truly that much more entertaining and edifying as well. I’d like to end with a quote from that run, not merely as an argument for the quality of the comics, but because it is the perfect summation of the very core of who Captain America is as a character and everything he could have been – should have been – in this film:

“Do you have any idea how tired I am of that? You people telling me that I just don’t understand? When it’s you people – you clever people – who don’t get it. I don’t let people die because it’s the lesser of two evils, or expedient, or because it serves the greater good. I don’t compare the act against something else. I see someone that needs help… and I help. You think it’s a weakness, you think it’s simple… but you’re wrong. It’s what makes us human… which is exactly what we’re supposed to be fighting for. I know who I am. I rescue the helpless. I raise up the hopeless. I don’t measure people’s lives…”