Continuity. It is the concept that stories told over many decades by many writers about a great many characters nevertheless have a cohesive and orderly narrative structure unifying them. Some fans consider continuity to be comics’ most sacred cow, while other readers regard it as the one most in need of slaughter. The former regard continuity as a means of lending an air of verisimilitude to superhero stories, embracing the notion that fictional universes such as DC, Marvel, or Valiant’s are not so much created as chronicled, the writers mere witnesses to worlds which exist independent of our observations; of course such worlds would have a sensible and holistic history to them.

I am by no means opposed to this metaphor – and maybe more – for the sub-creative process, but nevertheless I hold with those whom call continuity the wretched relic of our shameful past when the Marvel method and artist bullpens stripped writers and pencillers of their dignity and recognition. Readers have become more savvy since that time, and know that, despite DC’s insistence, Azzarello’s Wonder Woman in her eponymous series was far from the same character as John’s in Justice League. And when editorial staffs try to homogenize the two versions, continuity becomes chains which strangle storytelling and stifle creativity. Some auteurs are granted more freedom than others, such as Snyder on Batman or Johns on Green Lantern, but for the most part it’s no coincidence that many of the best comics of the Modern and Post Modern ages are (or were originally) out-of-continuity: The Killing Joke, All-Star Superman,American Alien, etc. Come the (inevitable) next Crisis or Rebirth or whatever DC names their next line-wide reboot, they should finally dispense with the concept of continuity, becoming more so a corpus of loosely related myths, befitting the American pantheon that their stable of characters have become.

Giving this opposition to continuity as such, I should loathe Trinity #1. It’s absolutely lousy with references to recent events throughout the DC universe and obscure episodes from far back in the characters’ personal histories. But instead of such call-backs removing the readers from the story at hand, Manapul in every instance uses continuity in service of characterization. None of what Manapul includes are the editorial asides of yesteryear, telling the reader which back-issue or related title to pick up on their next trip to their local comic shop. Rather, Manapul has carefully curated a selection of slices from the past and present of Batman, Superman, and Wonder Woman for the sole purpose of serving the story at hand.

For example, Wonder Woman relates the events of her own ongoing to Lois after dinner. In the hands of a less skilled storyteller such could have come across as cheap cross-promotion, but Manapul uses Diana’s failed friendship with Barbara Minerva only to highlight her very genuine motivation in seeking Lois as a friend, cementing that bond by the shared sense of exile experienced by the two – Diana from Themyscira and Lois from the pre-Flashpoint Earth-Prime.

Likewise with Clark regaling his dinner guests with his recollection of the pre-Crisis’ Batman’s infamous fashion faux pas wherein he flamboyantly dressed in a garish gradient of every color in the rainbow. Ostensibly such was to show his son Johnathan that even in his Batman-persona Bruce was not so solitary and aloof as their dinner guest had been suggesting. This strange callback proves that despite dressing a preteen in pantyhose and pixie boots to fight gun-toting gangsters, Batman nevertheless was protective of his partner. Such worked well enough in the scene on its own, but also serves to establish the characters’ motives later in the series when the “super-sons” of Robin and Superboy are eventually introduced, demonstrating that their dads aren’t deliberately endangering them; far from it, that the well-being of their wards is paramount.

I’ve never been a particular fan of the cartoon-inspired aesthetic which Manapul has made his signature style; I much prefer the adrenaline-infused semi-realism of Jim Lee, Ivan Reis, or Jason Fabok – who like Manapul collaborated with Johns during his run on Justice League. Yet even despite my bias, I’m hard-pressed to name another Rebirth series with such stunning art asTrinity. This is undoubtedly due to Manapul’s full freedom as an auteur on this title. The story and its images were coeval in his conception; the plot, the panel layouts, the palette of colors, were all part of a single creative act. That cohesion of vision is absolutely felt throughout, and the book is better for it. Such was somewhat unexpected, given how often I’ve criticized Hitch in his attempt during Justice League of America to perform the dual role of writer and artist, but Manapul proves here just how special the end result can be on those occasions when the gambit is successful. 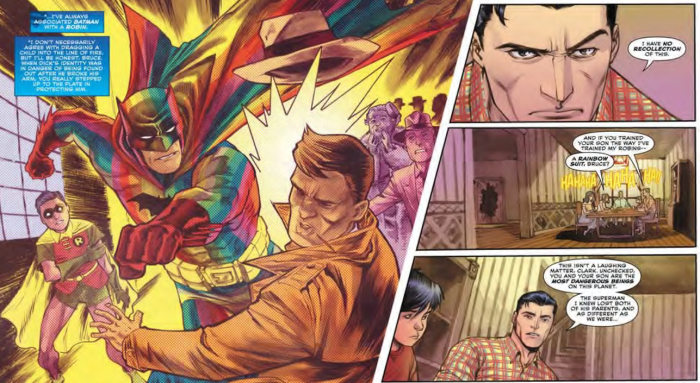 Trinity is a triumph. It makes the same “mistakes” as other Rebirth books – an overreliance on convoluted continuity, handing over writing duties to creators who work better as artists, etc – and succeeds, surprisingly, by doing exactly the same.  Rarely if ever have continuity call-backs been used so effectively to build out characters, not merely by reaffirming the development that took place in the past, but rather by making salient comparisons to the present plot. Whereas the Superman titles seem to have a ‘90s fixation since Rebirth began, Manapul pulls references from every era – the Silver Age, the Dark Age, and even the current Postmodern Age – to deliver a distinctive take of the Trinity that’s truly his own.