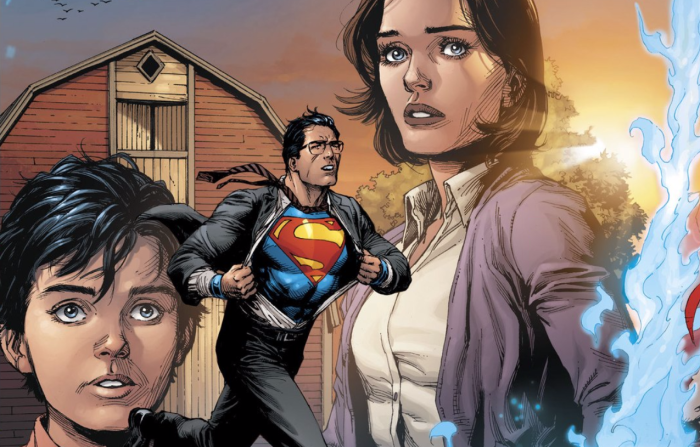 The Last Son of Krypton

The Man of Steel

The Man of Tomorrow

In the weeks following the seminal Adventures of Superman #500, each of these sobriquets for Superman appeared on his four respective monthly titles, followed by the words “is back!” and emblazoned boldly against a solid-colored background, no image at all save the iconic “S’ insignia, in every instance somehow slightly altered. The simplicity of the covers testified to the perceived importance – for the publisher and readers alike – of the tale inside: Reign of the Supermen. Even the title harkened back to the 1933 short story by Siegel and Shuster, the first time the pair would ever call a character such. The intention was clear: this was to be the start of a whole new era in the Superman saga, with the character radically reinvented almost as much as he’d been between ’33 and ’38. To that end, DC introduced four claimants to the cape, each claiming to be the real McCoy and challenging readers to discern which one actually was.

Was it the adolescent clone with Superman’s DNA but not his maturity? Was it the black-garbed being that had his face but not his morality? Was it the Shak-sized African-American who seemed to share his spirit? Between the proliferation of Supermen and the intrigue of the mystery, the Reign story arc seemed to my juvenile naivety to be the apotheosis of comic book storytelling, even more so than the Death of Superman arc which proceeded it. Never mind the genuinely great runs which define the decade of the 1990s in retrospect, such as Gaiman’s Miracleman and Sandman or Morrison’s Invisibles; in my mind at the time, comics would not – could not – getter better than Reign.

Then I grew up. But DC, apparently, did not.

At least the Superman staff. The rest of DC is experiencing something of a renaissance since Rebirth (pun intended), with titles such as Detective, Green Lanterns, Hal Jordan, Red Hood, and Titans all delivering consistently solid stories that build on what’s come before without retreading that same ground. But from the first it’s been clear that Superman and Action Comics were not merely leaning on ‘90s nostalgia, but wholesale repackaging every element from the death and return of Superman. Doomsday, the Eradicator, Steel, and even the Kryptonian battle-suit have all made requisite appearances. The demise of one Superman has led to a proliferation of Super-people, such as Jon Kent, Kenan Kong, Lana Lang, and even Lex Luthor. And doppelgängers of mysterious provenance that share Clark’s face and even DNA, with DC’s marketing challenging readers once again to figure out who’s genuine and who’s a pretender.

The final page of this issue asks in large print “Who is Clark Kent?” and suggests that one of six candidates is the correct answer, to be revealed in next week’s Action Comics #975 “anniversary” issue. As per Reign of the Superman, the best bet is that none of the candidates included are the correct one, despite DC’s claim to the contrary. In fact, the marketing fake-out would be in perfect keeping with DC’s recapitulation of every aspect of the death and return of Superman. This is further evidenced by the fact that none of the options seem particularly plausible.

The first option offered is that the “real fake Clark Kent” is in fact a more perfect Bizzaro. This is not without evidence. This Clark first appeared near and in close connection with Geneticron, a genetic research company who he’d been allegedly investigating. It is possible that altering Superman’s Kryptonian DNA to more closely match that of baseline homo sapiens might have stabilized the specimen and prevented decomposition. And past Bizzaros have all had false memories implanted in their brains during development. Under this theory, it’s possible that Dr. Oz commissioned his creation for some unknown purpose, and has been teleporting Bizzaro-Clark back to his extradimensional lair whenever the creature is not directly interacting with Lois and Superman. Of course, the erasure of Jon and the Smith homestead from existence appears as a very different effect than when Oz has stolen individuals in the past, such as Doomsday and Tim Drake.

The second option is the New 52 Superman. If this were the case, it would tie back to the Superman: Rebirth #1 issue in which the Post-Crisis Superman tried to resurrect his hypertemporal counterpart. However, this seems simultaneously too obvious while also not fitting the facts. It would neither explain the false childhood memories nor Nu-Clark’s infatuation with Lois, who was merely a platonic friend for all his life; Diana, if anyone, would be the object of his obsession. Both the New 52 and the Post-Crisis Superman appear together on the solicited cover to an upcoming issue of the Superman Reborn arc, but I suspect such to be a fake out.

The third, Mr. Mxyzplkt, has the reality manipulating powers to effect the existence of an illusory Clark, and is certainly Superman’s most underrated foe, as Moore’s “Whatever Happened to the Man of Tomorrow” proved. The most damning evidence against such is that it would prove a narrative non sequitur, with nothing suggesting his involvement other than possibly the very last panel of last week’s Action Comics, in which Clark states ominously, “Well if it’s fun you want, it’s fun you’ll get.” Moreover, given the Rebirth-era’s indebtedness to the early ‘90s Superman mythos, and given Mxyzplkt’s relative unimportance to that period, it seems unlikely that the writers would hinge the whole story upon him.

For a similar reason, the sixth, Magog, most certainly is not secretly posing as Clark. The character was created by Mark Waid as a direct repudiation of the direction Dark Age comics had taken. He’s a parody of the period the current creative teams are all so unironically reverent of. His inclusion – in addition to coming out of left field – would signal a serious lack of understand of the era being emulated, other than the fact that Magog was introduced at the tail end of such.

Doubling back to the fourth possibility, the Eradicator would be actually appropriate. His most iconic appearance was during the Reign of the Superman, and was already introduced as a player in the current storyline in the opening arc of Superman, wherein he attacked Jon. Moreover, he’d not only taken Clark Kent’s face for his own during Reign, but took on many of the deceased Superman’s memories, partially confusing himself for Kal-El. However, none of the disappearances of himself, Jon, or the Smith farm can be explained by any of the Eradicator’s known abilities.

The fifth and final option, Martian Manhunter, seems another red herring, one without any evidence whatsoever. The closest I can conceive is that he’s yet to make any major appearances in any Rebirth-era book, freeing him to have been brainwashed into thinking himself a human Clark Kent, but that seems beyond a long shot.

If I had to bet on any of the above, I’d short shares on all of them and place my money on option number seven. Just as neither the Cyborg, Last Son, Superboy, or Steel proved to be the resurrected Superman, expect the current creative teams to once again emulate the early ‘90s by delivering a similar “surprise.” Not that it would make the Superman Reborn arc any better than Reign of the Superman was in actuality. Though the issues sold well, and are fondly remembered by fans, whatever appeal Reign once had has been lost like so many other joys of childhood; it’s aged awfully, and to try to recapture the magic we felt when reading it in that moment of time only makes the memories sour. In the long chain of Superman stories, the Death and Return are among the weakest links, ones which Superman should break free from with a heave of his chest, letting them drop. Much more than Kryptonite, clinging so closely to the past is what’s really weakening the Man of Tomorrow.